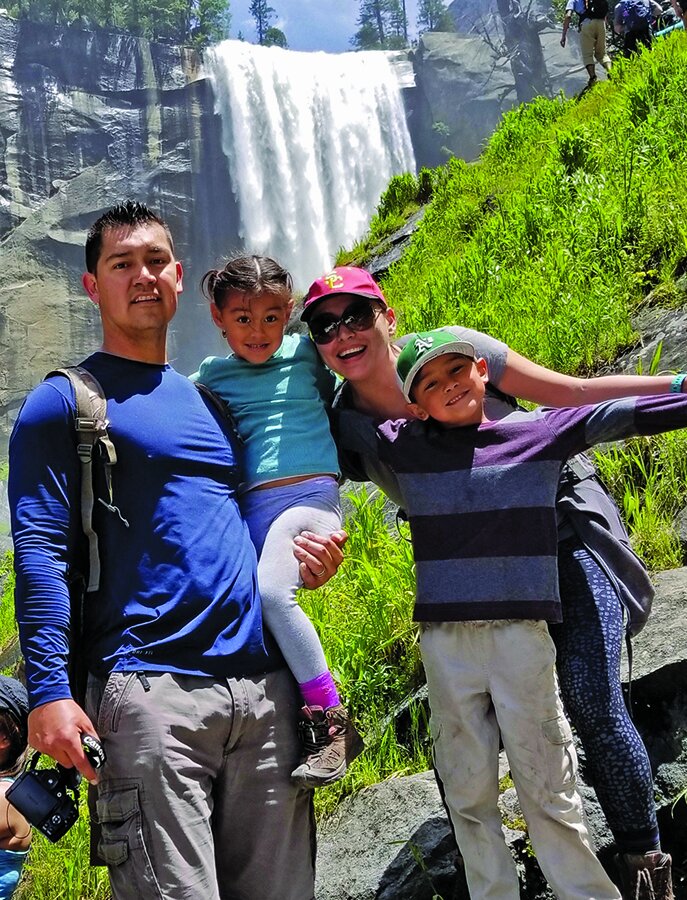 y parents grew up in very small towns in Jalisco, Mexico. My father was only able to complete the second grade of elementary school, just long enough for him to learn to read and write. He is the oldest in his family and worked with his father to help support his younger siblings. He began working in road construction at the age of fourteen. My father hung around the engineers so much that they started calling him nosey. He took whatever scraps of paper containing calculations that the engineers balled up and threw out. He taught himself geometry through those scraps of paper and still remembers discovering the Pythagorean Theorem in those notes. By the time he was seventeen, he bet an engineer that he could get a section of the road done with his own calculations. He did it beautifully.
‍
My mother’s maternal grandmother lived in the nearby pueblo1 of Mascota, Jalisco, and her paternal grandmother lived in the city of Guadalajara. My maternal grandfather was a bracero2 in California since the 1950s. These circumstances allowed my mother and her siblings to study. My mother attended a boarding school in Mascota for elementary school and stayed with her grandmother in the pueblo for middle school. She then went to the city for high school, as there were no high schools in the pueblo at the time. She had hopes of becoming a schoolteacher but did not complete her schooling once she married my father. While in her forties, when her three children were all grown, she returned to school and earned a certification as a nurse’s assistant. She has been working for the same clinic for more than a decade.

My father wanted to move to the U.S. to have better opportunities for work. He was in California in the late 1970s for a year before he returned to marry my mother. They spent their honeymoon avoiding border patrol agents as they crossed the Mexico-U.S. border. They both dedicated themselves to finding work as soon as they arrived. Dad has been working in the same ground support equipment for air industries company for forty years. He began as a custodian, and thanks to his thirst for knowledge and perseverance, he moved on to material prep, welder, leadman, foreman, quality inspector, and production foreman. Mom worked full-time in the assembly line of electronics factories before my younger brother was born. Our parents left for work at about 4:00am every morning and would leave my older brother and I in the care of our neighbor. We lived in a duplex, so we shared a wall with a wonderful family who is still very dear to us. Our parents moved my older brother and me to the living room every morning when they left for work. Mom would leave a large boot with my older brother so that he could throw it against the wall if we needed to call our neighbor before 7:00am.

We grew up poor in a 900-square-foot home, but had other wonderful privileges like a large yard, friends with whom we grew up, a public library at the end of our street, books at home, and a support system with our extended family. Our parents emphasized the importance of education as a pathway to success. They bought us a children’s encyclopedia that included a book on “World and Space.’’ At nine years old I read about the Big Bang Theory and I remember wondering if the explosion I felt in my head while reading this was similar to the Big Bang. That explosion was the start of a whole new universe of learning about science for me.

I grew up in the busy Los Angeles neighborhood of Boyle Heights filled with vibrant colors, Spanish music coming out of stores, and the smell of taco stands. These colors, sounds, and smells could not mask the lack of service our community faced. According to a Los Angeles Times Boyle Heights profile based on the 2000 census, only 5% of residents 25 and older received a four-year degree.3 Boyle Heights is also a redlined district that was then beleaguered in order to construct all the freeways that go through it.4 I grew up in a home that is in front of the 60, 5, 10, and 101 freeway interchange. Our public school system was also poorly served. The public high school I was assigned to, Roosevelt High School, was the second most populated school in the country at the time. Gang violence was also a major problem for those of us who grew up there. Navigating this life was tough.

Thankfully when our younger brother was born, Mom began working as a self-employed sales representative which allowed her to be present in our lives y nos tenía con la cuerda bien cortita.5 Along with making sure we were safe, Mom had to learn to advocate for us as students. She tells our family that I had always loved school. As a first grader, I was always the first to get home and do my homework and the first to wake everyone up in the morning to go to school. So, when I started crying every morning saying I didn’t want to go to school, she knew something was wrong. She decided to drop me off, walked around the building, and spied on our class through the window! She saw that a small group of students and I were being placed in the back of the room and ignored for most of the class time. Surely enough, she saw me crying in class. Mom walked into the office and gave the principal an earful. The rest of my time at this school was much better. I excelled in my classes and was asked if I wanted to skip third grade. My family and I decided not to.

Middle school. During my fifth grade, we lived in Mexico for one year so that my siblings and I could attend school there and improve our Spanish. Upon my return, I was ready to enroll in the local public middle school for sixth grade. I spoke with the school counselor who wanted to place me into nothing but development courses. Little did this counselor know that in fifth grade in Mexico, we were doing what seventh graders do here. I channeled my inner Chicana fighter—the same that I felt when watching Stand and Deliver as a young child—and told this counselor that he would be wasting my time. I told him that I would take those classes for one semester and that I would visit him again at the end of the semester and he would need to place me in the correct courses. My courses were changed after the first semester, but I was never told about Magnet or Honors programs while I attended this middle school. The lack of academic expectations from us as students was palpable. I felt that all this school cared about was making sure we survived. I recall being very upset during a so-called pep talk by a visitor to one of my classes. She told us about all the statistics facing our community, like how many of us would die because of gang violence and how many of us girls would be pregnant before completing high school. She then asked who wanted to go to college and I challenged her by saying that she was asking the wrong question. Why not ask us what college we wanted to go to? Even at the young age of fourteen I distinctly remember saying to myself, this is what oppression is. The sheer lack of expectations that we, Chicanx students from Boyle Heights and East L.A., would amount to anything.

Fortunately, I had the pleasure of meeting Mr. Mitchell. He was my eighth-grade fall-semester math teacher. Mr. Mitchell helped me solidify my love for mathematics and encouraged me to apply to a boarding school for high school. He told me that I needed to survive East L.A. and hoped that attending a boarding school would pave a path towards college. I applied to a Southern California boarding school and was invited for an interview. My mother, my best friend, and I traveled in my mom’s shabby 1981 Honda Civic hatchback, which we called Paco, to this interview. My friend and I laughed on our way towards the admissions building as we looked back at my mother’s car parked among shiny BMWs, Lincolns, and Jaguars. As we laughed, my mother told us that we were hurting Paco’s feelings and that he wouldn’t be happy. It was a funny moment, but it helped me quickly realize that I did not belong there. After a full day of interviews and tours, we were finally headed home. It turned out that Paco’s feelings were definitely hurt. The vengeful car did not want to turn on! To put the cherry on top of what felt like an embarrassing day, my friend and I had to push the car downhill so that my mom could kick start it. We got stuck at the bottom of the hill and a campus worker helped us start the car again.

High school. I attended an all-girls Catholic high school where the graduating classes were between 80 and 100 students. This school did not have many resources, but it was the time in which I felt the most empowered. I persisted through family challenges at home. I was trying to study in a 900-square-foot home with seven people in it. For most of the time while I was growing up, we had at least two adult family members from Mexico staying in our home while they worked. Some slept on the floor in the living room, and the light would keep them from sleeping. I resorted to studying in the bathroom. More than ever, I had aspirations to go to college, and I immersed myself in my studies. I was involved in student government, volunteered at the Los Angeles county medical hospital, ran track and cross-country, and was a letterwoman. All first-years took Algebra I. Towards the end of the spring semester we were informed about the school goals to offer the first AP Calculus course. Those of us who wanted the opportunity would need to take Geometry in the summer, so that we could move on to Algebra II our sophomore year, Trig/Pre Calc our junior year, with the finale of AP Calculus our senior year. About thirty young women signed up for this challenge. Some of my most memorable moments in high school are studying for Calculus with my friends at my house while we used my parents’ bedroom mirror as a whiteboard. These instances helped me set my goal to become a math teacher.

I wanted to empower students from my community through mathematics. Unfortunately, navigating the college application process was a very distant notion as no one in my family had attended a four-year college. The first time I stepped foot on a college campus was through an outreach program held at Loyola Marymount University. This was a two-week summer program held on campus for high school juniors from underrepresented minority populations chosen for their strong interest and aptitude for math and science. This program helped me feel confident in myself as a student. I applied for college my senior year and accepted the admission to the University of California, Santa Barbara (UCSB).

Continue reading the rest of Dr. Selenne Bañuelos's story using the link below:

and get latest news to your inbox
Thank you! Your submission has been received!
Oops! Something went wrong while submitting the form.
More Mosts