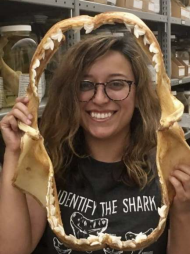 Vianey was born in Leon, Guanajuato, Mexico, but was taken to the USA while very young. She grew up undocumented until the age of 14 years old, when she was a freshman in high school. She graduated with a degree in mathematics and a minor in applied statistics from California State University, Bakersfield, in 2011 and began her PhD studies at Iowa State University that same year. She earned her PhD in statistics in 2019 and did a 1-year postdoctoral fellowship at North Carolina State University before beginning her faculty position at the University of Toronto in July 2020.

She also grew up in a bilingual and bicultural household and is fluent in both Spanish and English, and frequently conducts research in both languages. She is hoping to use that to recruit graduate students from Latin America, as well as support the immigrant students in Canada regardless of country of origin.

Vianey is an Assistant Professor, cross-appointed between the Department of Statistical Sciences and School of the Environment at the University of Toronto. She is primarily interested in working in the areas of ecological statistics, time series modeling, Bayesian statistics and, more recently, spatial modeling of environmental data. She is also currently a faculty affiliate at the Vector Institute and a faculty member of the Centre for Global Change Science at the University of Toronto. Additionally, she is serving a 2-year term on the Stan Governing Body and is the current secretary of the Statistical Ecology section of the Ecological Society of America.

Collaborative projects bring her loads of joy. So, while she is formally trained in mathematics and statistics, she is likely to be working closely with ecologists (especially those who work with sharks) often and on many projects. She was even recently featured in a comic book showing how mathematics plays a vital role in the scientific study of sharks.

What Vianey has found to be the most useful in her trajectory is reaching out and talking to people, even if she doesn't know them well, but if their scientific area of study is fascinating to her. She advises students, “Making connections and fostering collaborations can feel very uncomfortable at the beginning, but it's very rewarding in the long term.”

“To me, Hispanic Heritage Month is a celebration of all of us who have achieved more than what we dreamed was possible, and to dream of a future with less barriers for those who follow.”