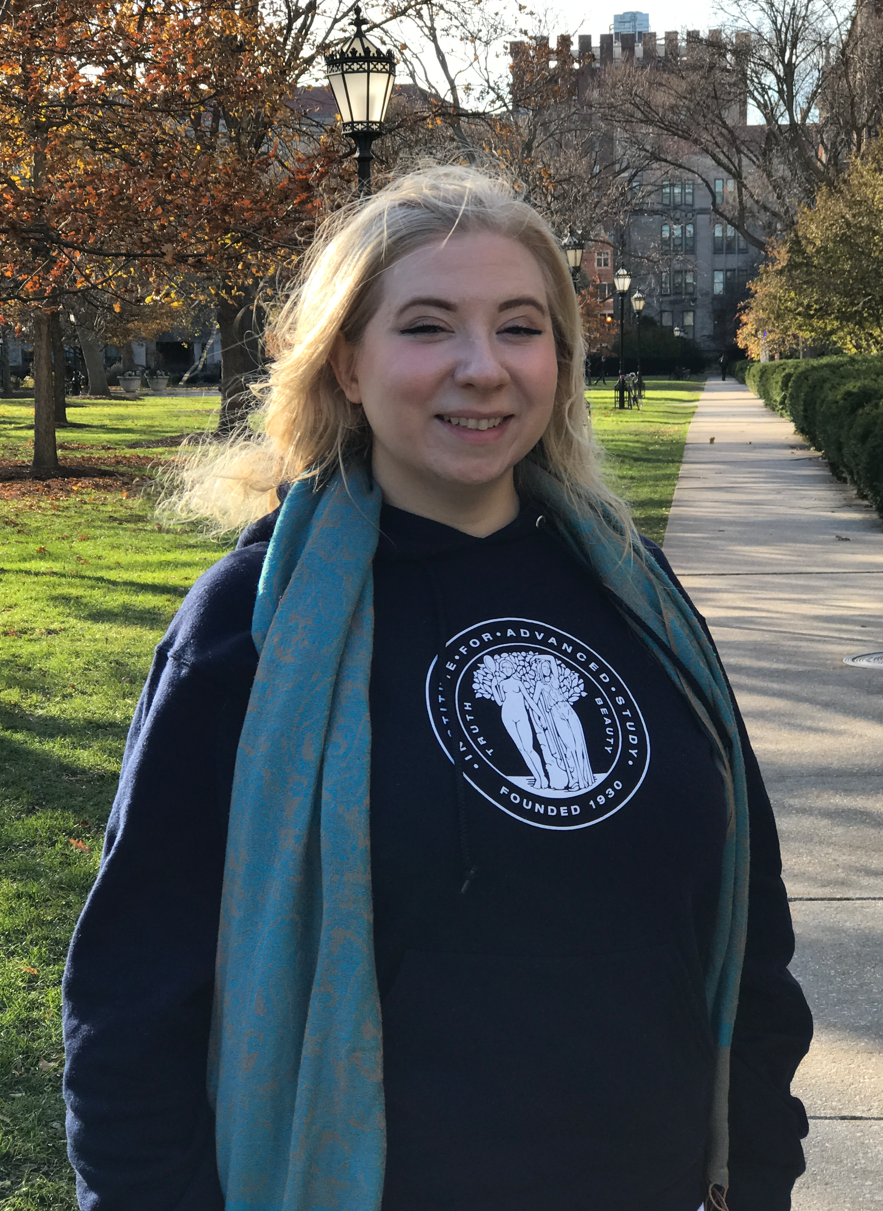 Topology examines the spatial relations and geometric properties immutable to continuous deformations. It is an ironic area of study for Dr. Rosemary Guzman, who maintained her love of math and passion for helping others, despite significant challenges.

Dr. Guzman was born with a form of albinism and is visually impaired. She is a first-generation student whose parents are from Guadalajara, Mexico. Her father and mother had limited education, only completing second grade and elementary school, respectively. She grew up poor, living in public housing and raised by a loving single mother. Dr. Guzman's Chicago Public School headlined the Chicago Tribune as a place where "the future dies early." Her school was declared by then-Secretary of Education among "the worst in the nation." Nonetheless, Dr. Guzman found comfort in the beauty and structure of mathematics as a young child, a juxtaposition from the chaos surrounding her.

She remained resilient and later enrolled at Northwestern University, earning her undergraduate degree in mathematics. There, she conducted research at FermiLab with physics professor Heidi Schellman which cemented her desire to pursue a PhD—albeit in pure mathematics rather than experimental physics. She subsequently earned a master's degree at Loyola University, then a PhD at the University of Illinois at Chicago with advisor and now collaborator, Peter Shalen. In 2011, she was the only female URM to earn a PhD in mathematics from a top 25 public university. This accolade was bittersweet, as Dr. Guzman lost her mother to cancer during her graduate program.

Dr. Guzman received an NSF Alliance postdoctoral fellowship, allowing her to move out of public housing and to the University of Iowa. During this time, she welcomed her daughter, and earned distinction from the graduating class of 2014 for "making a positive difference in their lives," both for her teaching and commitment to enduring enterprises that elevate young people.

Dr. Guzman strives to be a beacon for those finding their way in mathematics and validate the belonging of those who feel "othered," as mentors once did for her. Passionate about research, teaching, and service, she accepted a faculty position at the University of Illinois at Urbana-Champaign as the Assistant Director of the Illinois Geometry Lab (IGL), and was then awarded a prestigious American Academy of University Women postdoctoral fellowship at the University of Chicago with advisor Benson Farb. Some of her recognitions include a feature in the Notices Women's History Month 2018 issue, a card in the AWM EvenQuads Game, an invited talk at the inaugural LatMath Conferene, and an award for being "the realest 'OG' we know" from a group of former mentees who are now diversifying STEM themselves.

Dr. Guzman's research is in low-dimensional topology, geometric group theory, and hyperbolic 3-manifolds. A feature of hyperbolic space is that the angle sum of a triangle is less than 180 degrees. In stark contrast to the Euclidean case, the Gauss-Bonnet Theorem says that the area of a hyperbolic triangle is given by п minus the sum of the angles.

A takeaway is that the “shape” of a hyperbolic configuration determines its “size.” This property of triangles provides a shadow of rigidity in dimension two. The property escalates in dimensions three or higher for more complicated locally-hyperbolic geometric objects, and is articulated by the celebrated Mostow Rigidity Theorem: topological classification of finite-volume hyperbolic 3-manifolds is equivalent to their classification up to isometry.

Thus, for a hyperbolic 3-manifold M, its topological properties determine precise quantitative things. Dr. Guzman's research quantifies how the algebra determines the geometry of M, or "Quantitative Mostow Rigidity." The theme is to examine explicitly how geometric invariants, such as volume, are related to more classical topological invariants, such as the fundamental group (an algebraic object organizing loops of M into equivalence classes) and homology, and can be identified as part in a larger program for making the notion of Mostow Rigidity explicit.

Intriguing about the study of hyperbolic 3-manifolds is its synergy of mathematics. Applications of geometric analysis, combinatorics and graph theory have contributed results to Dr. Guzman's work and in advised research with undergraduates. In a recent series of papers, under mild topological restrictions, Guzman and Shalen obtained new linear upper bounds for the mod-p-homological-dimension (for any prime p), of a finite-volume orientable hyperbolic 3-manifold M in terms of its volume, improving on a result of Agol (winner of the 2016 Breakthrough Prize!), Leininger and Margalit. A surprising feature of the arguments of Guzman and Shalen is the requirement of an application of the Four Color Theorem.

Dr. Guzman promotes inclusivity through outreach initiatives and enjoys using these experiences to mentor, learn, and connect people with opportunities. Her field of topology is among the least diverse specialties in STEM, so she recruits and mentors promising students. While assistant director of the IGL, Dr. Guzman created a pipeline to give research opportunities to historically underrepresented students and co-organized the inaugural Geometry Labs United conference to promote their work. She has co-organized JMM sessions on enhancing diversity and highlighting women mathematicians, and served on panels for IAS, GROW, AWM, Field of Dreams, and others, to erode barriers in mathematics in higher education. But she also aims to make advanced topics in math more accessible. Some examples of this are her work with first-generation college students at Notre Dame's Geometry and Topology Workshop, with high school students at MathILy and as keynote speaker for Florida Women in Math Day, and with children as an inaugural U.S. Soapbox Scientist at Chicago's Navy Pier. Interested in more than demographic diversity, Dr. Guzman is keenly aware of how intersectionality and identities, including race, gender, socioeconomics, and disability, experience disadvantage from how academia is structured.

She advises students to not assume their accomplishments and hard work to be evident to those around you. Oftentimes, our culture merits the idea of "work hard and your accomplishments will speak for themselves." Instead, she advises students, “you need to speak for them: networking is critical for success. Foster relationships that allow you to flourish and contribute your talents, be mindful about your time, and ensure your institution’s support for your career development is more than platitudes. If you can, leave articulated pathways behind you that others can traverse.”

Most importantly, she tells students, “Find inspiration in the victory of everyday growth.” Impressed on her is an article by Prof. Amie Wilkinson describing the legacies and "patient assaults" on difficult questions in mathematics of Maryam Mirzakhani and Marina Ratner, two "...Snowflakes and Unicorns... [Who] Explored a Universe in Motion: The legacies and achievements of two great mathematicians will dazzle and intrigue scholars for decades." Reading an article exposing critical disparities of representation in mathematics, but validating the humanity of mathematics for all its triumphs and jagged edges, was some kind of solidarity at a time of feeling "other." Recalling meeting Dr. Mirzakhani, then a superstar graduate student, at her first-ever math conference years earlier, she was simultaneously brilliant, warm, inviting and left a mark on me.

At a conference at Stanford shortly after Dr. Mirzakhani—the first, and until this year only, female Fields medalist (math’s highest honor)—had passed away at age 40, she saw her mailbox, still full of letters, reminding her of how much could be done by a person with such limited time. While Drs. Mirzikhani, Ratner, and Wilkinson are one-of-a-kind, we can be inspired and reminded that we, too, are snowflakes and unicorns. “Copos de nieve, unicornios!”

Dr. Guzman has never stop asking, "What will my legacy be?—in math, family, society?" as she still has time to pen it, and her advice is that you, too, should never stop asking. She reminds students, “While you will experience failures, don’t be encumbered by them, and also don’t overlook them; do not waste these moments; they are formative in your growth, so make them transformative in your learning. Find YOUR inspiration. Sometimes you won't feel like anybody else, like a misfit, or alone. But people care about you—this very community. Remember, the greatest people in history were ‘misfits’. Create your right path: YOU are a unicorn!”

“Hispanic Heritage Month is a time of homecoming for me, an avenue of self-discovery through a deeper examination of our past and present, as demonstrated within these pages by the modern history-makers decorating them, of which I am humbled to be invited. It compels me to simultaneously think about the rich cultures that comprise us, the persistent disparities before us---especially for American Latinas in mathematics---and to celebrate our triumphs. It calls upon us to shape our legacy with intent: it is the foundation for the next generation. For me, this is a reminder of the great privilege of education: especially for many US Latinos, we are descendants of immigrants who sought better life conditions and opportunities for their children; they were considered "unskilled laborers," and many of our parents or grandparents did not have a secondary education. And yet, while there are strides to be made, in the course of only a few generations, they have achieved their dreams of us being able to strive for ours: Applying their work ethic, we have elevated ourselves in many domains, and for this I am proud.

Hispanic Heritage Month is also a time to honor our women; we have gilded a grit and mind borne from industriousness often necessitated by adversity---but this is our "unicorn power!"---we are innovators, imagineers, trailblazers, problem-solvers, mothers and daughters---in sum, world-changers.

For me, strengthening our community means finding new ways to uncover and nurture the hidden talent among us: diversity of people, and therefore ideas, is necessary to the advancement of science and society.”