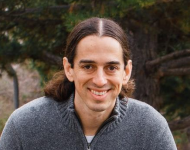 Paul Hurtado is an Associate Professor in the Department of Mathematics & Statistics at the University of Nevada, Reno (UNR). He is also a faculty member of the interdisciplinary Ph.D. program in Ecology, Evolution, and Conservation Biology. Paul has been interested in biology since childhood, and his interest in science and math was encouraged by his parents Mary “Fran” Hurtado (née Kronwitter) and Mike Hurtado. As a teenager, he began to appreciate the role of mathematics in science and its intrinsic beauty. He graduated from Central High School in Pueblo, CO in 1998 and enrolled at the local university as a double major (Biology & Chemistry) with thoughts about maybe minoring in Mathematics. While at the University of Southern Colorado (USC; now Colorado State University—Pueblo), Paul was torn between pursuing biology or mathematics. Eventually, with the support of some great mentors (including Hortensia Soto, Lee Anne Martinez, Jack Seilheimer, Sandra Bonetti, David Lehmpuhl, and Jay Zarr) he realized he could do both when he was introduced to mathematical biology through the Mathematical and Theoretical Biology Summer Institute (MTBI) at Cornell University in 2001 and 2002. He saw how graduate training in applied mathematics could lead to a career doing research on a diverse array of subjects in the natural sciences and in mathematics. Paul graduated with three majors: a B.S. in Mathematics, and a B.S. in Biology/Chemistry. He subsequently matriculated into the Center for Applied Mathematics at Cornell and received a Ph.D. in Applied Mathematics under Dr. Stephen P. Ellner, who was an excellent advisor and also demonstrated tremendous patience with Paul’s fondness for extra-curricular activities like rock and ice climbing, and bird watching. Paul joined UNR’s faculty in 2015, after a Postdoctoral Fellowship at the Mathematical Biosciences Institute and the Aquatic Ecology Laboratory at The Ohio State University.

In his current position, Paul teaches a range of courses at both the undergraduate and graduate levels, in topics that span applied mathematics, probability, and statistics. Paul also advises undergraduate and graduate researchers, and co-organizes a weekly open-door forum for graduate students and junior researchers to come and get help with their statistical analyses. Paul’s research lies at the intersection of the natural sciences and mathematics. He uses techniques from dynamical systems, probability, and statistics to develop and analyze mathematical models of biological systems to address biological questions of interest in fields like ecology, epidemiology, and immunology. He also likes to pursue some of the mathematical questions that arise from such applications.

As a graduate student and postdoc, Paul would visit some of the elementary school classrooms in his hometown to talk with students about the personal, career, and financial perks of pursuing a graduate education. More recently, he can be found helping out with events like "Museum Day" at UNR where he can be found in the museum of natural history masquerading as a biologist, helping to teach kids about birds and reptiles and all the fun ways you can use mathematics and statistics to advance the biological sciences.

Paul’s first bit of advice for students is, “find a good set of mentors who complement one another well, who will challenge you, and whose combined efforts will help support you in pursuing your academic and non-academic goals.” Second, he tells students to “‘work hard and play harder’ and find a healthy balance between work, family, and your other interests.” Third, for students interested in combining math and another subject: “immerse yourself in both fields, and be creative in how you build expertise. Invite yourself to a lab group meeting, for example. Those experiences and contacts will be invaluable when tackling multidisciplinary projects.”

“For me, Hispanic Heritage Month is a time to collectively appreciate the long and colorful history of the communities and cultures born from the meeting of European and American peoples a few centuries ago, and all that has happened since. There’s a lot of injustice and sorrow in that history, but also a lot of reinvention and cultural evolution that has brought us the diverse Hispanic cultural landscape that exists today globally, within the U.S., and in our local communities. It’s also a time I think about where my family sits in that landscape, and to celebrate that.”