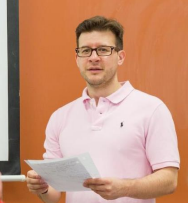 Marco V. Martinez is an Associate Professor of Mathematics and Actuarial Science at North Central College (NCC) in Naperville (suburbs of Chicago). He was born and raised in Bogota, Colombia. He went to Pontificia Universidad Javeriana, where he double-majored in Biology and Mathematics. He taught for a couple of years as a Lecturer at his alma matter before moving to the United States in 2008 to purse his graduate studies at the University of Tennessee-Knoxville, where he was fortunate enough to be mentored by Dr. Suzanne Lenhart. Marco was a Graduate Research Assistant at the National Institute for Mathematical and Biological Synthesis (NIMBioS). Marco graduated with a Ph.D. in Mathematics (Concentration in Mathematical Ecology) and a M.S. in Statistics in 2013. He was a 2013-2014 MAA Project NExT (New Experiences in Teaching) fellow. He was a member of the Mathematical Association of America’s Committee on Minority Participation in Mathematics from 2015-2021.

In 2016, NCC honored Marco with the Dissinger Teaching Award: this honors one junior faculty member per year who has distinguished themselves by their excellence in teaching. In 2021, Marco received NCC’s Mentorship Award for senior faculty: this recognizes the essential contributions that faculty members make outside of the classroom as mentors and the invaluable role that they play in students’ persistence, academic achievement, and future success. Marco’s dedication to students dates to his time as a graduate student where he earned the departmental Outstanding Graduate Student Teacher award.

Marco’s principal research interest focuses on using mathematical and statistical tools to answer theoretical questions that develop strategies to preserve biodiversity. He has become very involved with the Actuarial Science program since his arrival at North Central College. He supported his students to create the Actuarial Science Club in 2014, and the Gamma Iota Sigma (GIS), Gamma Epsilon Chapter in 2018. He coordinated the program unofficially from 2014 to 2016. In 2016, in recognition of his contributions, he became the first person to be appointed as coordinator of the program, a position he held through 2021. As such, his responsibilities included curriculum oversight and development, student advising, assessment, internship coordination and job placement. Based on this accomplishments and student nominations, Marco was selected as the GIS Faculty Advisor of the Year in 2021, a national award that was presented at the International GIS Conference. In addition to his efforts at NCC, Marco has been engaged regionally since 2019 in the SOA/CAS High School Day, where he and his students join an amazing group of volunteers from industry and academia to show students from underrepresented groups in the Chicago area what being an actuary is and how to become an actuary. Marco strongly believes each success in his career has been the result of the work of his mentors. He owes everything to them! Now, when his students come to say thank you for his support, Marco repeats the wise words of his mentors “The way to say thank you is to help others when you have the opportunity, especially those that have had fewer opportunities in life.” He is so proud that he already sees many of his students giving back!

Since Marco arrived at NCC, he has been the faculty advisor of the Latinx Student Association. His major focus has been providing more support to undocumented students. He has helped several students navigate complicated financial aid situations and apply for REU/internships/jobs that do not regularly take Dreamers. He has also worked closely with NCC nationally recognize First-Generation Program. He frequently works one-on-one with students: helping them invest in their careers, coaching them to get involved on campus, and helping them strategically manage their family and work obligations so they can prioritize their goal of graduating from college.

Marco reminds students that nothing is more important than your happiness, your family and your health (physical, mental and emotional): “There is nothing you can not accomplish, but everything will be easier if you do it with your community, that is, if you find and take care of your people. Learn as much as you can from others, but also share what you know to help others. When in doubt, family and health first!”

“[Hispanic Heritage Month] is a time to recognize the contributions and struggles of our communities. But also, it is a time to get inspired and fueled to keep making our communities better prepared and more involved every day. I cannot thank the organizers of this initiative enough: it is an honor to be in this calendar, next to some of my heroes and mentors.”