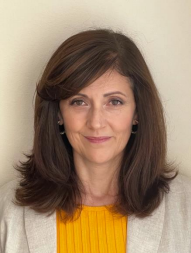 Estela Gavosto is the Associate Vice Chancellor for Diversity, Equity, and Inclusion, and a Professor of Teaching (Department of Mathematics) at the University of California, Riverside. Her husband is also a mathematician, and they have two sons. She developed her interest in mathematics during high school, at the Instituto Politécnico Superior in Rosario, Argentina. This school is housed in the Universidad Nacional de Rosario (UNR) and provided her with a strong foundation for college. After graduating with a “Licenciatura” in Mathematics at UNR, Gavosto completed her Ph.D. in Mathematics at Washington University in St Louis and continued on to postdoctoral positions at Princeton University and the University of Michigan. Subsequently, she was a faculty member in the department of mathematics at the University of Kansas (KU), Lawrence, for 23 years. Gavosto held several leadership positions there, and in 2019, she moved to the University of California, Riverside. Throughout her educational career, she has led efforts to offer alternative paths for non-traditional students who want to pursue careers in research to learn advanced mathematics. Gavosto has received leadership training from the NSF Advance program and the SACNAS Leadership Institute, and her teaching and mentoring have been recognized by twelve teaching awards.

Gavosto's principal field of mathematical research is Several Complex Variables. In particular, she has worked in two core areas of Complex Analysis: the Cauchy–Riemann operator and complex dynamics in higher dimensions. She has also worked in scientific computing, particularly the areas of symbolic computations, computer-assisted proofs, and mathematical visualization. Through her tenure as Associate Chair and Director of Undergraduate Studies of the Department of Mathematics at the University of Kansas, she observed the pressing need to increase development opportunities for underrepresented students in STEM. These needs inspired Gavosto to change her professional focus and concentrate her efforts on mentoring programs with rigorous research experiences, which have been shown to increase the number of students entering and completing Ph.D. programs. She developed and directed (with collaborators) several programs to increase such research career opportunities for underrepresented students in STEM. She was the principal investigator (PI) on several grants from the National Institutes of Health, which funded programs like the KU Initiative for Maximizing Student Diversity Program, the Post-Baccalaureate Research Education Program, and the 500 Nations Bridge Collaboration: Haskell Indian Nations University/University of Kansas. At KU, she was director of the Office for Diversity in Science Training and Executive Director of the Multicultural Scholars Program. At the University of California, Riverside, a Hispanic Serving Institution (HSI), Gavosto is currently working on projects like the AAAS SEA-Change Initiative and the Hispanic Serving Research Universities Alliance.

Gavosto believes there are many possible paths to a fulfilling mathematics career; nevertheless, all paths have detours and setbacks. She reminds students, “What matters during your journey is the next step in front of you; just like with a math problem, try another approach if the first attempt does not work.”

“Hispanic Heritage Month is an opportunity to reflect on Latinx people's contributions to society in general and in higher education in particular. Furthermore, it is important to recognize the accomplishments of many Latinx mathematicians with pride and how they serve as role models for younger generations, as well as acknowledge how much more work is needed to achieve Latinx equitable participation in STEM disciplines.”