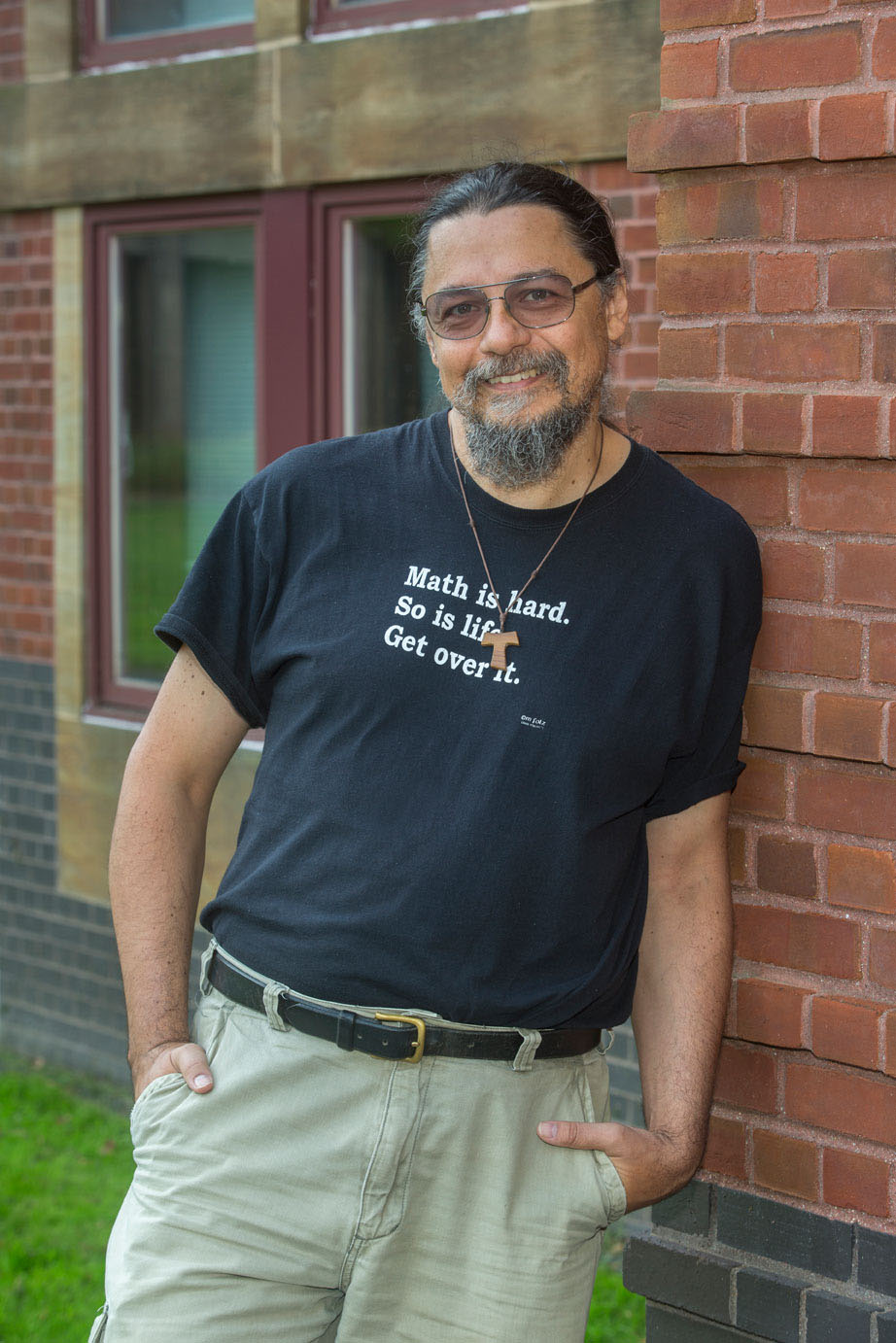 Professor and Chair of Mathematics
The University of Alabama
Poster

David was born in Green Bay, Wisconsin, a blue-collar mill town in northern Wisconsin. He was the youngest of six children. His father, Antonio, was an electrical technician at a local factory; his mother Lillian, was a full-time homemaker until his father retired, when she started working for social services as a case manager. He attended the University of Chicago as an undergraduate, graduating in 1985. After working briefly for an insurance company, he went to graduate school at the University of California, Berkeley. He got his Ph.D. under Donald Sarason in 1993. He then had a postdoctoral position at Purdue University, working with Christoph Neugebauer from 1993 to 1996. In 1996, he joined the faculty at Trinity College, a liberal arts college in Hartford, CT. He was promoted to associate professor in 2002 and full professor in 2005. In 2015, he left Trinity to become Chair of the Department of Mathematics at the University of Alabama, the position he currently holds. David has an active research program and has written over 100 papers and 3 books. His 4th book, on the Stieltjes integral, will be published in 2023. However, he also enjoys teaching at all levels. At Trinity, he taught six first year seminars and supervised three senior honors theses. At Alabama, his first Master’s student graduated in 2020 and is now a Ph.D. student at Washington University in St. Louis. His first Ph.D. student graduated in the summer of 2022 and has a postdoc at the University of Kentucky. He currently has one Ph.D. student and two Master’s students. David has been married for 36 years to Gabrielle Cruz-Uribe (né Soltys). Gabrielle is an avid weaver and fiber-crafter. They have three adult children. David is a professed member of the Secular Franciscan Order, a Catholic community of lay men and women.

David’s research is in harmonic analysis, particularly the study of weighted norm inequalities, variable Lebesgue spaces, and Rubio de Francia extrapolation. He is also interested in the applications of harmonic analysis to the study of degenerate elliptic and parabolic PDEs. Recent work includes the study of regularity theory for solutions of degenerate elliptic PDEs with data Orlicz spaces; necessary conditions for the boundedness of linear and multilinear singular integrals on weighted spaces (joint with his student John-Oliver MacLellan); weighted norm inequalities for linear and multilinear maximal operators on variable Lebesgue spaces (joint with his student Jeremy Cummings and with Oscar Guzman, a PhD student from Colombia); and Rubio de Francia extrapolation on matrix weighted spaces (joint with Marcin Bownik, University of Oregon). David is also the chair of the Department of Mathematics, a position where he oversees 27 tenure-track faculty, three teaching faculty, 5 postdocs, 14 instructors, 46 graduate students, and 5 staff members. He has worked hard to bring diversity to the department by hiring four women, two Latinos and one Black faculty member. He is very proud of the fact that the graduate program is approximately 40% women and 30% minority (Black and Native American). He has created an annual colloquium series in honor of Hispanic Heritage Month.

David is on the board of the Consistent Life Network, a national pro-life, pro-peace organization that advocates for the consistent life ethic. He is also on the board of Theatre Tuscaloosa, a regional theater company. He serves on the local and regional fraternity councils for the Secular Franciscan Order. Previously, he was an anti-death penalty activist in Connecticut and contributed in some small way to the abolition of the death penalty there in 2012.

David advises students who want to go on in mathematics, either as teachers or researchers, to be prepared to work hard: success depends more on commitment than on innate ability. Don’t become discouraged by failure: start over and learn from your mistakes. Find mentors who believe in you but who also push you to be the best version of yourself. Learn as much as you can, as early as you can, about the professional aspects of mathematics: what does it mean to be a graduate student or to be a faculty member? Find out the expectations, both explicit and hidden.

“For me, Hispanic Heritage Month is a time to celebrate our past, acknowledge our present successes and failures, and to build towards a better future. When they were growing up, I constantly reminded my kids, “Never forget where you came from.” Looking at where we came from helps us to understand where we are now, and, seeing how far we have come, give us the energy and hope to move ourselves forward in the future.”