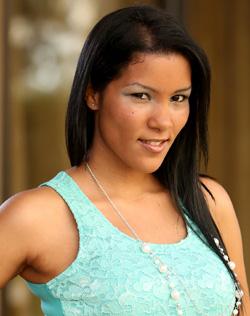 Although Melissa Nanette was born in Pennsylvania, she is a “boricua de pura cepa.” She was raised in Puerto Rico, and her family is from that beautiful island. Growing up, she was always passionate about numbers. Nevertheless, a future in it didn’t seem so appealing since teaching didn’t look that interesting; at the time. Melissa thought that education was the only way to go when studying mathematics. Could she ever be more wrong? High school came; she had changed schools, and that move triggered a journey in the field of Pharmacy. Melissa was able to pursue pharmacy technician studies while in high school, which led her to enter college with the idea of getting a Ph.D. in Pharmacy. She started her bachelor’s degree in Natural Sciences. Research internship crunch time came, and Melissa ended up in a math summer research internship back in 2009. That experience was what ignited the fire in her to change majors. Her eyes were completely opened to the world of mathematics and the infinite opportunities to which it could lead. She got her bachelor’s degree in Mathematics in 2011 at the University of Puerto Rico in Cayey, then a Master of Public Health in Biostatistics in 2013 at the University of Puerto Rico Medical Sciences Campus, and later a Master of Science in Business Analytics in 2015 from National University in California. Throughout all those years of study, Melissa attended several mathematics and statistics conferences, met many colleagues, and participated in multiple research projects and training. All of that exposure together with work experience3W2 led her to be involved in the world of advertising. As of 2021, she is a Senior Sales Analyst for Effectv, Comcast Advertising Sales Division.

Melissa won a couple of scholarships from the National Alliance for Doctoral Studies in the Mathematical Sciences from the University of Iowa. She used the scholarships to attend conferences and to host the first big Mathematical Conference at the University of Puerto Rico in Cayey. Melissa was Vice-President of the Math Club in her senior year during her bachelor’s degree. She worked as a Research Mentor within AGMUS Institute of Mathematics in Puerto Rico. At the Institute, Melissa took three high school students under her wing and carried out biologically relevant research projects involving Knot Theory and Differential Equations. At the end of 14 weeks, each student presented their project at a Pre-College Symposium. In 2017, Melissa was published as a co-author for the book Applications of Regression Models in Epidemiology. Most of what Melissa has worked on involving mathematics has been health-related. She is not only accomplished in that field but also in the media and advertising field. Melissa has several work achievements involving process automation using coding or prediction modeling and some industry-related accolades. Melissa attended and participated in the Academy within the Festival of Media LATAM celebrated in Miami, FL, in 2014. The Festival of Media has been showcasing the very best in media and marketing campaigns while upholding and maintaining global industry benchmarks throughout the sector for more than 14 years.

Melissa’s day-to-day involves numbers. Her current job is mostly about statistics and forecasting as she is an influential business advisor to the advertising sales organization.

The advice Melissa would give to undergraduates wanting to work in business, industry, or government would be to always go forward. Do not think because you got derailed from the original plan, that it will not result in the best outcome. Melissa changed majors along the way, not only once but twice. What kept her going and being relevant is that she always said yes to the opportunities that presented her way.

“Hispanic Heritage Month means that my culture matters. It is the time for me to be extremely proud of who I am and where I come from. Getting that space to feel honored and reminded of all the accomplishments and how far Hispanics have gotten is important. The only way to continue to move forward and do better is for all of us to keep supporting each other with love and respect.”