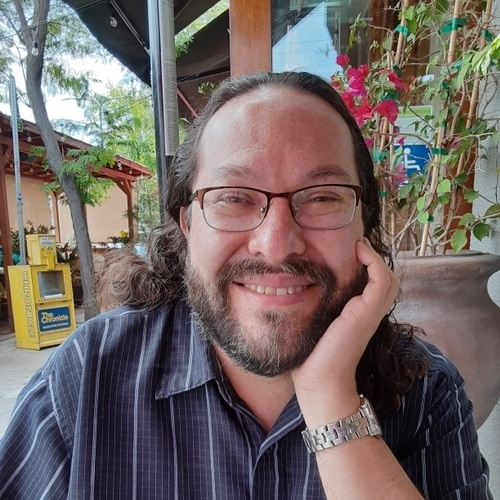 Dr. Caicedo studied mathematics at the Universidad de los Andes in Bogotá, Colombia, and moved to the United States to pursue his Ph.D. at the University of California, Berkeley. He specialized in set theory and received his degree in 2003.

Dr. Caicedo worked as a postdoc at the Kurt Gödel Research Center in Vienna from 2003 to 2005 and, from 2005 to 2008, was the Harry Bateman Research Instructor at Caltech. He was an Assistant Professor in the Department of Mathematics at Boise State University from 2008 to 2012 and an Associate Professor from 2012 to 2015. Dr. Caicedo has been affiliated with the American Mathematical Society as an Associate Editor for Mathematical Reviews since 2015.

While in academia, Dr. Caicedo served as a reviewer for Mathematical Reviews and wished he could contribute more directly to their mission. Eventually, the opportunity presented itself. He feels particularly happy that this job allows him to continue his research and to maintain ties with the research community.

Dr. Caicedo has published about twenty papers and edited two conference proceedings. He has received grants from the National Science Foundation and the American Institute of Mathematics.

As an Associate Editor, Dr. Caicedo looks at recently published articles and books and decides which are contributions to the research literature on mathematics and should, therefore, be indexed in MathSciNet. For articles in fields he supervises, he then decides what level of coverage to apply; articles are either indexed, listed with their abstract, or assigned to a reviewer. In the latter case, Dr. Caicedo then edits the resulting review to remove mathematical inaccuracies. All steps of this process involve familiarity with the topics involved and require keeping up with the latest developments in these areas.

Dr. Caicedo wants students to know that choosing a career outside of academia is not necessarily an easy decision, particularly since most of the training one has received is aimed at producing future academics. If one started their career invested in academia as an institution, going elsewhere may feel intimidating. But, even if the initial jump takes thought, the result can be just as fulfilling.

He says: “It is very important to be open to diverse ideas, collaboration, and expanding one's skills. Usually, what determines success is not new theorems but a willingness to learn and the ability to handle technical material. One is not necessarily going to be teaching or doing research, but many jobs involve communication skills and creative problem-solving. It is also important to separate one's self-worth from one's job and to allow time to relax and to pursue other activities. This seems extremely basic advice, but it is easy to feel burnout when not taken seriously.”

“As mathematicians, it is common to work alone and avoid asking for help; sometimes it feels as if the culture of mathematics requires it. Instead, I've found that collaborating and exchanging ideas with others is much more rewarding. Hispanic Heritage Month reinforces this idea that we are part of a larger academic community and reminds us that our true community is much larger, our culture and identity as Hispanic/Latinxs gives us valuable insights and perspective, and we should support and elevate each other and ensure that those who come after us can reach even further.”