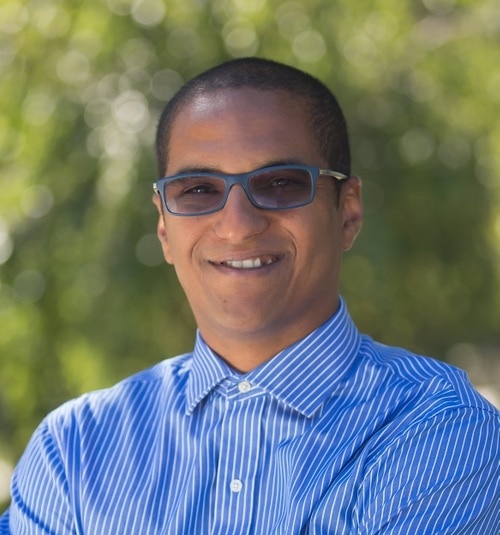 Ricardo Conceição  was born in Feira de Santana, Bahia, Brazil. He grew up among a large and close family of uncles, aunts and cousins, and considers himself  lucky to have been raised by two moms (his mom and her mother) and two adopted dads (his uncles).

From a very young age, he knew he wanted to be an inventor, scientist or journalist. But at thirteen he discovered that there were people who studied mathematics for a living, and he decided that he would go to college to  learn more about mathematics. Dr. Conceição  became a major in Math Education (Licenciatura em Matemática) at UEFS - Brazil. The wonderful mentors he  had during this period opened his eyes and several doors to a career as a mathematician. He went on to finish  a M.Sc. in Mathematics from UFPE - Brazil and a PhD from the University of Texas at Austin.

Currently, Dr. Conceição  is an associate professor at Gettysburg College. He lives in Gettysburg with his two sons and wife. When he's not teaching or  thinking about all things number theoretic, he is playing guitar or soccer with friends, or playing video games, board games or biking/hiking with his kids.

Sometimes, when discussing his courses with his students, Dr. Conceição  compares learning mathematics with touring a city where he is the tour guide. And in their exploration of mathematics, his aim is to help them become familiar with the place, to teach them about the importance and beauty of the places they are visiting, to make them more acquainted with the local culture and language and to remind them to drink lots of water. He believes that the teacher-as-a-tour-guide metaphor also illustrates an important aspect of the partnership he wants to develop with his students;  just like a tour guide, his role is not to carry the students on his back throughout the journey, but to show them the way while being very supportive.

As an undergraduate student in Brazil, Dr. Conceição  had great mentors but no concrete opportunity to do research in mathematics. One of the reasons he joined a small liberal arts school was to provide to his students the research experiences that the circumstances denied him. To this day, he has collaborated in mathematics research  with thirteen undergraduate students which have resulted in manuscripts and presentations at conferences and Gettysburg's mathematics colloquia.

Dr. Conceição  has given several outreach talks, refereed several papers, helped organize a couple of special sessions in number theory and is currently one of the organizers of the Mid-Atlantic Seminar On Numbers (MASON), an annual conference serving  the community of number theorists in the mid-atlantic region.

I see the Hispanic Heritage Month as an opportunity to celebrate and shine a bright light on the achievements and challenges of the latinx and hispanic communities in the US. Given the current political climate, it also plays a very important role in fighting stereotypes and disrupting some expedient political narratives. Since Lathisms started, I enjoy the opportunity of sharing in my classes the profile of Latinx/Hispanic mathematicians, some of which are my dear friends. I feel very honored and humbled to be featured this year.