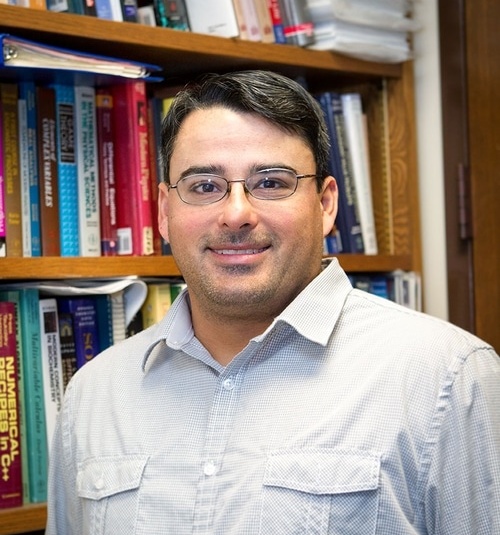 René Salinas was raised in Alice, Texas and earned his B.S. degrees in Biology and Physics at Texas A&M University-Kingsville in 1996, sparking his interest in ecology.  In 2003, Salinas completed a Ph.D. in Mathematics with a concentration in Mathematical Ecology from The University of Tennessee-Knoxville and shortly after completed a postdoc position in the Department of Ecology and Evolutionary Biology, also at UTK.  In 2004, Salinas joined the Department of Mathematical Sciences at Appalachian State University as an assistant professor, focusing his teaching on inspiring students, research on agent-based models in wildlife biology, and service on trying to figure out how a university works.  As a full professor since 2015, Salinas has continued to collaborate on numerous interdisciplinary projects, including the Smoky Mountains STEM Collaborative and has recently established a sports analytics research group.  In addition, he has taken on several leadership roles, including serving as the university’s NCAA Faculty Athletics Representative and participating in the Chancellor’s Academic Leadership Development Program.   Salinas’ favorite accomplishments are those of his students whom he hopes he has helped find their passion.  Salinas and his wife Tracie, also a professor, have two children and enjoy spending time traveling to baseball tournaments and dance recitals.

Salinas' research has spanned a variety of topics during his academic career.  As an undergraduate, he spent a summer helping graduate students sample bobwhite quail habitat in parts of the King Ranch.  This was his first experience in wildlife biology research.  In pursuit of coupling that interest with mathematics, Salinas found the Mathematical Ecology program at the University of Tennessee-Knoxville, which lead to his dissertation on modeling management strategies for black bears in the southern Appalachians.  Salinas has since modeled feral hogs and helped develop optimal control methods for partial differential equations. The overarching theme of his work has been developing optimization methods for complex models, including the still elusive optimal control for agent-based models.    Recently, Salinas has established a research program in sports analytics.  He helped Appalachian State's College of Arts and Sciences become the first academic unit to purchase Trackman for a university baseball team.  The state-of-that-art Doppler radar device is operated by students who also analyze data and develop reports.  Current research projects include mapping umpire strike zone bias and determining successful fastball characteristics.

Having developed teaching strategies through sharing research with students, Salinas has cultivated a teacher-scholar approach that values the integrity of the content as experienced through research. His teaching style and practices emerge from valuing the experience of research and developing students’ own curiosity and resilience.  Students in Salinas’ classes find a balance of traditional academic discourse and an engaging, inclusive classroom culture.  Examples are relevant, and problem contexts are based in the real world.  As a result, data are often messy, encouraging students to engage with complex problems and develop the persistence necessary for careers or simply habits of mind that rely on collaborative problem solving.  Open ended problems motivate student engagement in the classroom, and Salinas values involving students in interdisciplinary coursework, particularly his Mathematical Biology course.  Salinas recommends that all students participate in broader experiences outside the classroom.  Whether REU experiences or internships, supporting students in applying for, participating in, and reflecting on their experiences are opportunities for teaching students that go beyond the course.  Student successes, in turn, motivate Salinas in the classroom.

Undergraduate research and mentoring are activities that Dr. Salinas highly values.  He has regularly mentored students in research projects and in preparing them for research opportunities through REU programs.  After leading the development of the undergraduate certificate in sports analytics, Salinas has taken on the role of mentor and advisor for students, a role in which he provides guidance in projects and organizes internship opportunities.  Salinas has also coordinated mentorship opportunities for community college students participating in residential research opportunities at Appalachian in a partnership with Southwestern Community College funded by NASA.  As an advisor to students in the department, Salinas has been nominated on multiple occasions as an outstanding advisor in the College of Arts and Sciences.  In service to the community, Salinas has talked with high school classes in the region about topics in mathematical biology and regularly serves as a grader for problem solving contests for middle and high school students, including COMAP and Moody’s Mega Math.  Further, Salinas has regularly served as a Faculty Senator and on faculty search committees.  Currently serving as the NCAA Faculty Athletics Representative, Salinas has taken the opportunity to strengthen student advising, prompt new supports for student-athletes from underrepresented groups, and diversify the Athletics Council.  Salinas often serves as a mentor to new faculty in the department as well, meeting with new faculty to discuss their scholarship plans, service commitments, and work-life balance.

It's a time to reflect on the parts of me that don't often present themselves in my daily academic life.  Sometimes I'll put a Tejano or Mariachi station on Pandora while I'm working (door wide open!) or splurge and by real fajitas to make my favorite Tex-Mex dish.  Everyone misses home to some extent, but hispanics have a deeper void that never gets filled.  That void gives us our passion for family and culture.  Grito!!!