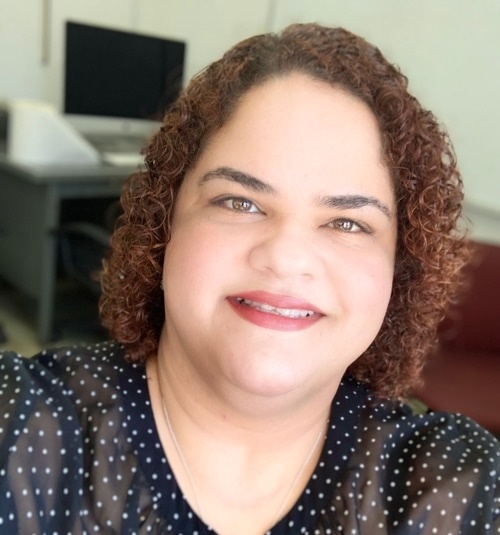 Mayteé Cruz-Aponte received an education in the public school system in Puerto Rico. She earned a Bachelor in Science on Computational Mathematics from the University of Puerto Rico at Humacao in 2002, a Masters in Science on Mathematics from the University of Iowa in 2004 and a Ph.D. in Applied Mathematics for the Life and Social Sciences from Arizona State University in 2014. She is currently an Associate Professor in the Department of Mathematics – Physics in the University of Puerto Rico at Cayey where she established a Biomathematics Lab. None of these accomplishments could have been possible without the guidance and encouragement of her parents and the mentorship of powerful academic role models that encourage her to pursuit a Ph.D. Prof. José Sotero-Esteva from UPR Humacao that invited her to be part of his research lab in computer sciences as her first undergraduate research experience.  Dr. Ivelisse Rubio that mentored her on first and second REU experience at the Summer Institute in Mathematics for Undergraduates (SIMU) in 1998 and 1999, REU that Dr. Rubio co-founded and co-directed. That summer REU opened the door for many more academic opportunities in Dr. Cruz-Aponte’s career and it was the first step on her pursuit of a Ph.D. and to become a researcher and professor.

At her Biomathematics Lab, Dr. Cruz-Aponte’s research focuses on mathematical epidemiology and the spread of communicable diseases.  Her main work is to construct mathematical models of life events such as the dynamic of metapopulation models of the spread of diseases. The core of her research work is to apply mathematics in real-life situations that are important for our society, to protect the population from emerging epidemics, and to help governments make wise decisions to eradicate or mitigate the effect of diseases with interventions such as treatments or vaccinations.  Mayteé works on meaningful research exploring the different scenarios of controlling or eradicate epidemic within the population is important. Her work specifically targets models to predict the outcome of an intervention on the course of an epidemic over time within the population locally or globally. Her team uses differential equations and computer simulations to study different scenarios and analyze mathematically the systems of equations as well.  She has worked on various topics with her undergraduate research assistants such as: the field of mathematical epidemiology.   Her team has worked on: Avian Influenza Type H5N1 as well as pandemic influenza A-H1N1; Mathematical Epidemiological models of sexually transmitted diseases in Puerto Rico such as chlamydia, herpes and human papilloma virus as well as vector borne diseases such as Zika and Dengue.  Mathematical Endocrinology models: Mathematical Model of Stress Variation on the Hypothalamic-Pituitary-Adrenal Axis and its Repercussion on Hormones Levels, and a development of a computational model of glucose toxicity in the progression of diabetes mellitus, this last one was published in collaboration with her undergraduate students.

Her goal as an educator is to be more than a professor; she is always available to mentor and guide students to achieve their academic goals. Her work at a four-year Hispanic serving institution helps the academic community grow, specially underrepresented minorities and woman. As a Puerto Rican female she can contribute to diversity by stimulating an inclusive educational environment.  Places were student could collaborate and meet their potential by learning collectively.   Dr. Cruz-Aponte uses interdisciplinary applications and meaningful examples that students can relate to their field of study across the mathematics courses to engage them.  Mayteé helps students from minority groups to achieve their goals, using her experience to inspire them, with hard work and determination.

Mayteé is the counselor of the Mathematics Circle at her institution, a student organization that organizes academic symposiums and community service. She also has mentored more than 40 research assistants in the past 6 years at UPR Cayey, most of them presented on national and international conferences and 3 of them published a peer review paper.  In 2019 as part of an IPERT grant in collaboration with the Institute of Interdisciplinary Research at UPR Cayey she mentored 14 research assistant to work on mathematical models of sexually transmitted diseases.

Hispanic Heritage Month is a time to celebrate and reflect upon the accomplishments of our community and how much we still need to work on. It is important to advocate our academic accomplishments and demonstrate to our younger generations that even with adversities, goals can be accomplished and the future can brighter.  My main goal is to encourage future Hispanic scientist to grow and excel, it is important to grow up to be the best role model you could be, someone reliable and a helping hand to this emerging generation.