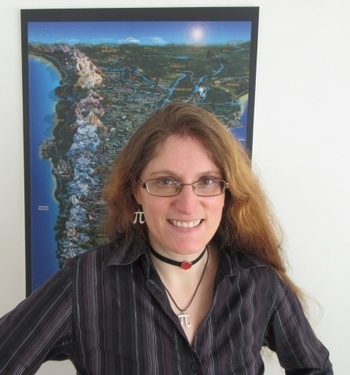 Dr. Lalín grew up in Buenos Aires, Argentina. She has been interested in science since very young and dreamed of being an astronomer when she was in elementary school. She became particularly keen on mathematics in high-school when she started participating in the Argentinean Mathematical Olympiad (OMA). At the olympiads she learned a lot of mathematics, traveled to distant places, and met some of her closest friends for life. She earned a licenciatura degree at the University of Buenos Aires in 1999 and a PhD under the guidance of Fernando Rodriguez-Villegas at the University of Texas at Austin in 2005, where she was a Harrington Fellow. She was a member at the Institute for Advanced Study, a visitor at MSRI, IHES, and the Max Planck Institute, and a PIMS postdoctoral fellow at the University of British Columbia. In 2007 she started as an Assistant Professor at the University of Alberta, and in 2010 she moved to Université de Montréal, where she is currently a Professor and a member of the Centre de recherches mathématiques (CRM).

Dr. Lalín works in Number Theory. She has several research interests that revolve around L-functions, which can be described as generalizations of the Riemann zeta function, and elliptic curves. Since her PhD thesis, she has been working with Mahler measure, which is a height that can be defined on polynomials. One of the results of her thesis relates the Mahler measure of a 5-variable polynomial to the Riemann zeta function evaluated at 5. She has been studying relations between special values of L-functions and Mahler measures and contributing to the understanding of very general statements such as the Beilinson's conjectures. These questions have led her to the study of polylogarithms and regulators and to applications to Low-Dimensional Topology. She has also been very interested in distribution questions around L-functions, and that led her to study questions in Arithmetic Statistics of function fields involving the distribution of the number of points and of zeta zeroes in families of curves and moments of L-functions. Some of her last collaborative projects involve the study of Mahler measures of higher genus curves (with several students), applications of Mahler measure to the Vol-Det conjecture (with Champanerkar and Kofman), the counting of Salem numbers related to arithmetic hyperbolic 3-orbifolds (with Belolipetsky, Murillo, and Thompson), and the study of moments of cubic L-functions over function fields (with David and Florea).

With respect to teaching, Dr. Lalín has taught more than a dozen different courses at the university level, including Discrete Mathematics, Galois Theory, Group Theory as well as graduate classes in Algebraic Number Theory, Elliptic Curves, and Modular Forms.  She is proud to have taught in three different languages. Dr. Lalín likes challenging students with stimulating problems with the aim of making connections between different topics. Her aim is to have a fun and supportive classroom.  She has been a frequent speaker at the local Mathematics Club and other outreach venues where she has shared parts of her research and her love for Rubik's cube with undergraduate and high-school students. She has also taught mini-courses in several undergraduate summer schools.

Dr. Lalín has supervised the research of more than 45 undergraduate and graduate students and postdocs, and has written 15 articles with her mentees. She has been involved in various programs aimed at encouraging the participation of women in mathematics and has served in committees or collaborated with the Association for Women in Mathematics, the Committee for Women in Mathematics (CWM) from the International Mathematical Union (IMU), and the Women in Mathematics Committee of the Canadian Mathematical Society (CMS). She is a member of the steering committee for "Women in Numbers", a community that promotes the participation of women in number theory research mainly by organizing collaborative workshops. She has kept involved with mathematical olympiads by serving as coordinator in three International Mathematical Olympiads (IMO), as a member of the Canadian Mathematical Olympiad committee of the CMS, and as a Putnam couch in her department. She is currently the Vice-President (Quebec) of the CMS . She serves at the Board of Directors of the Banff International Research Station (BIRS) and has served in the NSERC Discovery Grant Mathematics and Statistics Evaluation Group both as member and as Pure Mathematics stream chair. She has been a member of several scientific committees, including those of BIRS and CRM. She is an editor for the Publications Mathématiques de Besançon - Algébre et Théorie des Nombres.

My culture and my heritage are an essential part of me and influence how I view the world and how I do mathematics. I welcome the opportunity to get  to know  other members of the Hispanic community, to learn from their struggles,  and to celebrate their contributions and achievements, both in life and in an ever evolving and increasingly complex mathematics world.