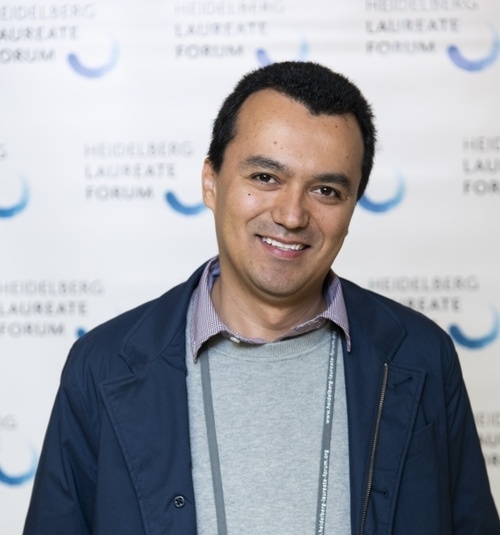 Hiram López grew up in Aguascalientes, a city in the middle of Mexico.  Unfortunately, there is no beach in his home city, but Aguascalientes is the yearly host of the “Feria Nacional de San Marcos”, which is one of the most representative fairs from Mexico. Hiram earned his Bachelor of Science degree in Applied Mathematics from autonomous university of Aguascalientes in August 2008. While getting his baccalaureate degree, he was a visiting scholar at UNAM (national autonomous university of Mexico) in Fall 2007. From 2008 to 2010 Hiram lived in Mexico City, when he was a M.S. student at CINVESTAV-IPN (center for research in advanced studies of the national polytechnic of Mexico). In 2010 Hiram returned to his home city to become an Associate Professor at his alma mater. In 2012 Hiram went back to CINVESTAV-IPN to get a Ph.D. in Mathematics under direction of Prof. Rafael H. Villarreal in May 2016. By earning a Swiss Excellence Scholarship Award, part of his Ph.D. studies, from September 2014 to September 2015, were made at University of Neuchatel, Switzerland, under supervision of Prof. Elisa Gorla. Hiram was a Postdoctoral Fellow at Clemson University from 2016 to 2018, under direction of Dr. Felice Manganiello. Hiram joined Cleveland State University as an Assistant Professor in the department of Mathematics and Statistics in January 2019. Since then, Hiram lives in Cleveland with his wife, his daughter and his son.

The main area of research of Hiram is coding theory from a commutative algebraic point of view and network coding. He uses mainly tools and results from commutative algebra, combinatorics, optimization, graph theory and algebraic geometry. He also conducts research on image processing, where he is interested in the theory and the applications of binary images.Coding theory is a bridge between information theory and mathematics that has been extensively studied since the innovative paper of Claude Shannon in 1949. One of the brilliant Shannon’s ideas was to explain how linear codes, which are mathematical objects, could be used to reliable transmit information from a single source to a single receiver. Coding theory is being revolutionized to address current applications, such as distributed and cloud storage systems, for communicating throughout the 5G network, which is implemented for mobile communication, and for noise mitigation in quantum computers. Evaluation codes are codes that depend on underlying algebraic structures that can be studied using combinatorics, commutative algebra, and algebraic geometry. They are among the most important codes because its algebraic properties and applications. Network coding is an emerging powerful scheme to multicast network communication. It is employed to transmit several packets of information from a single source to a several receivers throughout a network. One of the main goals of network coding is to maximize the channel use, which means sending as many as possible messages to all terminals every time that the network is utilized. A family of codes that can be used to maximize the channel use of a network is called rank-metric codes. Rank-metric codes are currently receiving a lot of attention in the post quantum cryptography community due to the small public key sizes they can support.

Respect and patience with students and for people in general; Pleasure to teach and to explain topics several times in different ways; Passion and love to transmit the knowledge. Those are some of the main ingredients of a successful professor and are also the same qualities that Hiram tries to increase every day in his life. Hiram has taught at undergraduate and graduate level since 2010. During these 10 years, he has given more than 40 courses. His experience includes traditional, online and hybrid classes, to groups as small as 10 students and as large as 100 students. He is currently advising undergraduate, M.S. and Ph.D. students. Hiram is on the process of developing a text of applications of linear algebra to information theory for undergraduate students. The goal is to engage students to the science, because a common concern from students is that they do not know how math can be used. Of course, students know classic applications from calculus, but they struggle to explain how the rest of the math can be used in practice. Hiram has been working closely to the group STEM Peer Teachers (SPTs) at Cleveland State University. The primary goal of the SPTs is to help increase students’ interests, abilities and confidence so that they can excel in their respective math classes within the Algebra to Calculus II sequence.

Since a graduate student, Hiram has been advising to the Latin community about opportunities to attend STEM congresses, meetings, workshops, Summer schools and conferences and to carry out STEM undergraduate, graduate and postgraduate studies. Because the shared information, some people were able to take advantage of these opportunities. The key fact behind is to realize that organizations like CIMPA, SIAM, IMPA, MSRI, AMS, CONACyT, World Bank, Santander Bank, MAA, and Universities around the world, encourage minorities to apply for support to attend this sort of events. Hiram is a registered advisor of the Association of Latin Professionals For America (ALPFA), which is an organization at Cleveland State University. The purpose of the organization is to further advance the success and progression of the Latin community and to assist in preparing them for future professions.Hiram has been linking and advising Mexican Ph.D. students who want to pursue a postdoctoral stay in the US with postdoctoral advisors at US universities. This connection is important because creates a non-trivial path for Mexican Ph.D. students to carry out a postdoctoral stay in the US. The idea is to get a postdoctoral grant from the Mexican National Science Foundation and a lecturer position at a US University with a reduced teaching load. These two positions together provide similar conditions than a US postdoctoral fellowship. This combination is a win-win for the US University and for the Mexican Ph.D. student. Of course, US universities offer excellent postdoctoral fellowships. These fellowships are very competitive and sometimes have nationality restrictions, which make very difficult or impossible for Mexicans to access to these wonderful opportunities.

Helping people is one of the most efficient and gratifying ways to improve the place we live for us and ours. When a person advances in an aspect of their life, the whole world is enhanced as a result. Hispanic Heritage Month is the right time when we can show all what Hispanic and Latino people were and are doing to obtain a better world. Sometimes I feel everyone is pulling, but in different directions.  Hispanic Heritage Month is the time when we can find a common direction to pull all together.