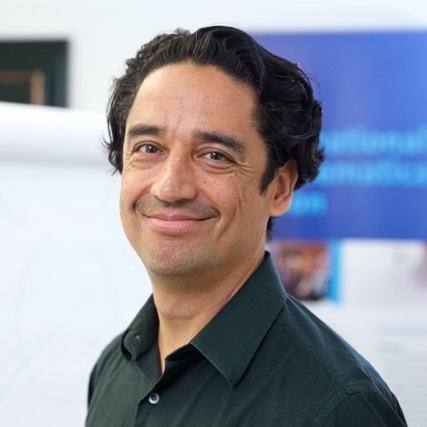 Angel Pineda was born in Honduras.  Both of his parents are medical doctors who were the first in their family to go to college.  His grandmothers were the driving force for his parents to get a college education.  His mother was raised by a single mother who had a small grocery store.  His father is the seventh of eleven children and his older siblings helped support him financially through medical school.  This collaborate passion for education in his family shaped Angel’s view of mathematics as a team effort.

At the time Angel finished high school in Honduras, he didn’t know anybody who had gotten as much financial aid as he needed to attend college in the US.  Because of that, he started college in Guatemala.  He also applied to colleges in the US he found had financial aid for foreign students by reading a book at the local library.  Lafayette College accepted him and gave him more financial aid than both his parents made together in a year.  That book on financial aid ended up changing the trajectory of his life.

Angel’s research is in medical inverse problems typically involving statistical detection and estimation theory.  The combination of mathematical modeling, optimization, statistics with a medical application is very interesting to him.  Mathematics has much aesthetic and functional beauty. He is an applied mathematician because he likes to solve problems that have some of both.

A unifying theme in his research is maximizing the information content of medical images for a specific task.  In a problem where the task was estimating the amount of water and fat in magnetic resonance imaging (MRI) he used a bound on the variance of the estimates to choose which data to collect.  This work was part of an interdisciplinary collaboration with radiologists, physicists and engineers to develop a method of fat/water separation which resulted in four patents, several papers and is currently being used in clinical MRI scanners.

Another task in radiology is the detection of a signal in a cluttered background.  This may be a lung nodule in a computed tomography (CT) scan or a bleed in an MRI scan.  A large part of Angel’s work has focused on optimizing data acquisition and reconstruction for improving performance in these detection tasks both by humans and computers.  His current research studies how methods for accelerating MRI using compressed sensing and deep learning can be optimized based on signal detection.

The problems Angel studies require medical knowledge, engineering as well as mathematics and statistics.  These complex problems are best addressed by collaboration between experts in these areas.  In those teams, Angel plays the role of theoretician, even though in his mathematics department he is considered very applied.  His research has received funding from the American Lung Association, GE Healthcare and the National Institutes of Health (NIH).

In many of his classes, students work on projects exploring something which interests them.  These projects reverse the roles of students and teachers because students teach the class new applications of the material.  Students have done projects on whether chocolate lovers are more likely to vote democrat or republican, how to predict the future value of a stock and how to rank NBA teams.  These projects were done at levels from first year undergraduate students to graduate students.  Angel loves learning from his students.

Angel tries to make his lectures an active conversation with the students as they explore the material together.  When students ask a question to which he don’t know the answer, he assigns himself “professor homework” and will present the answer in a future class.  He wants them to know that he is learning too.  At the heart of his teaching philosophy is creating a space for students to actively engage with the material and feel safe asking questions.  He encourages students to tackle the difficult problems and see them as opportunities for growth rather than obstacle to overcome.

As a student and faculty member, Angel has been fortunate to have wonderful mentors who have become his friends.  He strives to be that type of mentor to his students and younger faculty.  A major emphasis of his mentoring has been in research with students.  To date, he has mentored five master’s students and seventeen undergraduate students in research projects leading to presentations and publications but more importantly to having students tackle challenging open questions for months leading to results which are new.  In a research project with students, the new mathematics is not the only product, the student growth is an important outcome.

Through his involvement in mentoring student research he became a member of the MAA Subcommittee of Research by Undergraduates and received a grant from the Center for Undergraduate Research (CURM).  Because of his specific interest in supporting underrepresented students in mathematics to attend graduate school, he is a mentor for the Math Alliance and was the Principal Investigator of an NSF grant supporting underrepresented student preparation for graduate school.

Another major area of service for Angel is supporting mathematics in developing countries.  Being from Honduras, he is aware that there is much talent around the world which is not developed because of lack of access to resources.  Angel has been a volunteer lecturer in Cambodia for the International Mathematical Union (IMU), was the co-author of a report on the state of mathematics in Latin America from the IMU, served on the Commission for Developing Countries of the IMU and is currently the secretary for GRAID, a program providing research assistantships to students in the poorest countries.

Hispanic Heritage Month is a time to remember that mathematics is a community effort where contributions are made by many people at many levels.  It is important to recognize and encourage the mathematics being done by the Hispanic and Latinx members to make mathematics a more inclusive community.