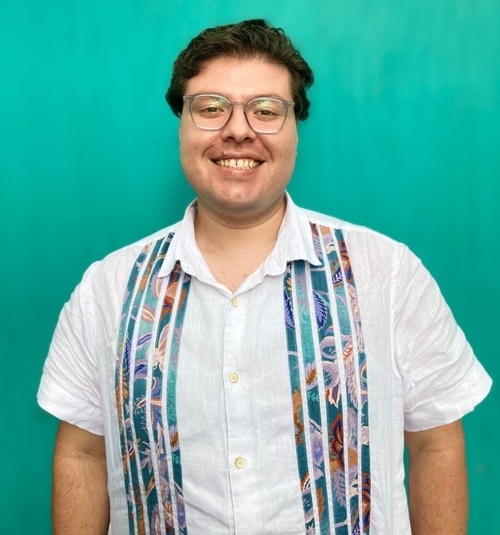 Andrés R. Vindas Meléndez is currently an NSF Graduate Research Fellow and PhD Candidate at the University of Kentucky where he is advised by Benjamin Braun.  He is also an affiliated graduate student in the Latin American, Caribbean, and Latino/a Studies program.  Before arriving to Kentucky, he earned a master’s degree in mathematics at San Francisco State University where his advisors were Federico Ardila and Matthias Beck.  He completed his undergraduate degree in mathematics at the University of California, Berkeley, where he minored in Philosophy and Chicano/o & Latina/o Studies.

Andrés grew up in a Spanish-speaking household in Lynwood, CA located in South East Los Ángeles.  He is the son of Costa Rican immigrants, Sara Meléndez and Rodolfo Vindas, and has two younger sisters: Alejandra and Sarah.  He credits much of his success to his family who has always supported his academic goals.  Andrés began his schooling as an English as a second language student. In 1998, when he was in the first grade, California’s Proposition 227 constrained and eventually banned bilingual education; as a result, he found comfort in a subject that did not require an extensive use of his English skills: mathematics. He owes part of his interest in mathematics to his middle and high school mathematics teachers, all of who were Black or Latinx.  They served as role models and exemplified that people from immigrant and underrepresented communities can also do mathematics.

Andrés’ research is in algebraic and geometric combinatorics, where he considers algebraic and geometric objects and studies their underlying combinatorial structure.  Combinatorics is the branch of mathematics that studies the enumeration, combination, and permutation of sets of elements and the mathematical relations that characterize their properties.  In particular, he investigates combinatorial and geometric properties of polytopes and their lattice point enumeration.  H.S.M. Coxeter wrote that “a polytope is a geometrical figure bounded by portions of lines, planes, or hyperplanes; e.g., in two dimensions it is a polygon, in three a polyhedron.” Andrés’ work has expanded and continues to expand the literature of rational polytopes.  Combinatorics is an active research area and Andrés enjoys it because it allows him to collaborate not only with established mathematicians but also with both undergraduate and graduate students who may be new to research.

Andrés’ teaching is student-centered.  As an instructor he has had the opportunity to help guide students to learn abstract mathematics and find their voice while also developing a sense of ownership of their knowledge and mathematical abilities.  In the classroom, Andrés strives to create community in order to build students’ confidence in spite of society’s negative messages and stigma about mathematics.  He also aims to build meaningful and empowering experiences with mathematics and his students, while also challenging his students to think about the power structures that are present in and outside the classroom/academia.  His pedagogy is focused on centering the questions: Whose voice is being heard? Who is present (or missing) in the classroom?  How does privilege, race, class, language, gender, sexuality, etc. play a role in learning mathematics?  Andrés also realizes that he grows and learns alongside his students: the student-teacher relationship is reciprocal.

Early on in his mathematical career, Andrés learned of the value and need to provide positive mathematical experiences and opportunities for those marginalized and underrepresented in mathematics.  As an undergraduate he became involved with the Society for Advancement of Chicanos/Hispanics and Native Americans in Science (SACNAS) and also co-organized the 2013 American Indian Science and Engineering Society (AISES) Regional Conference at UC Berkeley. At San Francisco State University he co-organized and co-founded the Distinguished Women in Mathematics Lecture Series with the student group, Mathematistas.  He served on the culture-setting team for the 2018 Latinxs in the Mathematical Sciences Conference which was hosted by IPAM/UCLA and with Pamela Harris, he has also co-organized sessions of “Latinxs Count: A Combinatorics (Math) Session” at the SACNAS National Conference.  He is currently on the programing committee for the first-ever Queer and Trans Mathematicians in Combinatorics Conference to be held June 2021 in the Fields Institute in Toronto, Canada.  He serves as a staff writer for the American Mathematical Society’s Graduate Student Blog and is a Junior Associate for Lathisms: Latinxs and Hispanics in the Mathematical Sciences.  At the University of Kentucky, he is a graduate advisor for the Latino Student Union, a graduate mentor for the UK alliance scholars of the Kentucky-West Virgina LSAMP Program and SACNAS chapter co-founder and board member.

The word “Hispanic” was invented by the US government and is a term that comes with its controversies.  The reality is that it has now been widely accepted and is the term many people in the community identify with, though I am cautious to use the word myself because of its erasure of privilege and history. Nonetheless, Hispanic Heritage Month to me means celebration and reflection.  It allows us to celebrate the histories, cultures, languages, practices, and diversity that is found in our community.  We don’t all fit into one image, we are diverse, multi-faceted, and multi-dimensional and it should all be celebrated.  It also allows us to reflect on how far our community has come and accomplished and what more needs to be done for everyone to thrive.