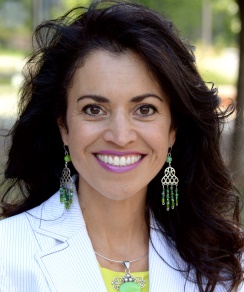 I identify as Chicanx (Latinx) and Rarámuri.

Originally from San José, California, Rochelle Gutiérrez grew up in a Chicanx activist family where she learned the value of hard work, perseverance, and union organizing from her father who was an electrician. She gained the art of “creative insubordination” from her mother who held herself to a high ethical standard when advocating for students in the community college system and the broader Latinx community, especially farm workers and those who are undocumented. Gutiérrez began her career at Stanford University, where she studied biology.  She completed her graduate studies at the University of Chicago, where she was awarded a Spencer Foundation Dissertation fellowship and graduated with distinction. A few years later, she became a National Academy of Education/Spencer Post-doctoral Fellow. She is Professor of Curriculum and Instruction at the University of Illinois at Urbana-Champaign where she has worked since 1996. As a Fulbright scholar, she studied secondary mathematics teachers in Zacatecas, México, where she documented cultural practices and algorithms used in Mexican classrooms. Gutiérrez is most known for her theories on equity and research on the political nature of mathematics/teaching, work that garnered her the Excellence in Research Award from the Association of Mathematics Teacher Educators. She was a featured speaker in the March for Science, and TODOS Mathematics for All awarded her the Iris M. Carl Equity and Leadership Award for her commitment to serving historically oppressed students in mathematics. Gutiérrez is a Science for the People fellow, where she models practices and creates resources for others who want to cultivate a mathematics that is “by the people, for the people.” Before and throughout graduate school, she taught middle and high school mathematics to adolescents in East San José, California. In her free time, she is a board game geek, sews old clothing into new objects, teaches power yoga, and agitates for change with respect to local politics.

Rochelle Gutiérrez is an internationally known scholar who interrogates the unearned privilege that mathematics holds in society and the roles that race, class, language, and gender play in teaching and learning mathematics so as to open up new possible relationships among living beings, mathematics, and the planet. Through in-depth analyses of effective teaching/learning communities and longitudinal studies of developing and practicing secondary teachers, her work challenges deficit views of students who are Latinx, Black, and/or Indigenous and unearths some of the structural sources for inequality. Her research suggests that beyond content knowledge, pedagogical knowledge, or knowledge of diverse students, teachers need “political conocimiento” to help them navigate high stakes testing, challenges from parents or administrators, and other power issues that arise on an everyday basis. Her early work focused upon effective high school mathematics departments that served students who are Latinx, Black, and/or living in poverty. She found that beyond tracking policies, classroom instruction, or relationships with students, the manner in which teachers collectively organized themselves and defined their role as teacher influenced their ability to effectively advance students. Her current research projects include: theorizing the roles of mathematics in relation to power, identity, the body, and authority in society; supporting mathematics teachers who engage their students in rigorous and creative mathematics and who are committed to social justice; and documenting moments of "nepantla" (contradictions and multiple realities) and “creative insubordination” in the everyday practices of mathematics educators. Gutiérrez coined the phrases “political conocimiento,” “rehumanizing mathematics,” and “living mathematx” to encourage the field to move beyond issues of access and achievement to more deeply consider identity, power, and our relationships with each other, including lands, animals, plants, and bodies of water.

Over the years, she has helped build the Program (now Department) of Latina/Latino Studies; served on the National Writing Team for the Standards for Preparing Teachers of Mathematics produced by the Association of Mathematics Teacher Educators; and advised the Museum of Science and Industry.

In her teaching, Gutiérrez centers the voices and contributions of Indigenous and Latinx people, among others, and privileges the oral not just written word. She argues this is important because our ancestors have passed down important knowledge through various forms of storytelling that are not found in journal articles, books, and other academically sanctioned venues. In mentoring students into the value of public scholarship, she applies her “abuela” rule, requiring students to explain their ideas in ways their grandmothers would understand. She recently received the outstanding undergraduate teaching award in the College of Education.  More than just K-12 education, Gutiérrez is invested in improving mathematical experiences in universities and broader society. Recognized for her contributions to innovations in mathematical sciences education at the undergraduate/graduate level, she gave the James R. C. Leitzel Lecture at MathFest, provided a distinguished lecture at MAA, led the Park City Math Institute’s Workshop on Equity in Mathematics Education, gave two keynote presentations at MSRI’s Critical Issues in Mathematics Education workshops, and taught a course on activism for mathematicians.

A lifetime member of SACNAS, over the past 30 years Gutiérrez has served as board member, judge, mentor, presenter, keynote speaker at the national conference, and co-advisor for the University of Illinois student chapter. She is known for highlighting the importance of a diverse body of people for contributing to and maintaining a vibrant field, saying, “It’s not just that people need mathematics; mathematics needs people.”

Later this year, she will appear in the film The Gatekeeper: Math in America. Gutiérrez was featured in Notices (Fall 2018) where she explained her reasons for her research and how it connects with other mathematicians, accessible at  https://www.ams.org/journals/notices/201807/rnoti-p791.pdf

“A month of “Hispanic Heritage” reflects how much more work we need to do to honor our people. Hispanic is a word invented by the US Census Bureau to count bodies. There is no country/nation that is Hispania and no peoples who originally referred to themselves as Hispanics. Creating a category based solely on Spanish language erases our original connections to land and the Indigenous languages we speak/spoke. “Hispanic” also hides the fact that some of us have been historically oppressed on these lands while others have come with privilege and resources to the US. Even so, the month gives us a chance to reclaim our histories by practicing and developing mathematics in ways that are true to our people and our ways of knowing. It reminds me of a Mexican proverb upon which I was raised:  Quisieron enterrarnos sin saber que éramos semilla.”