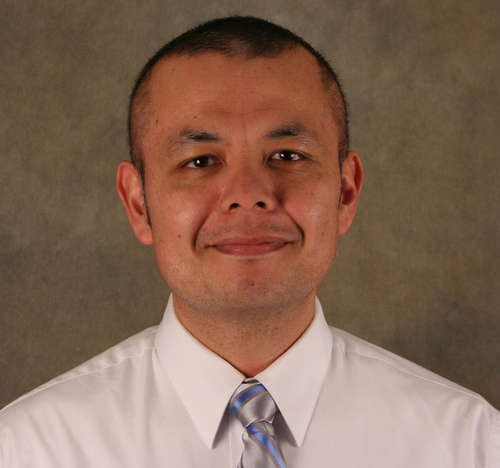 ‍Roberto Soto was born in Los Angeles, CA, to two undocumented immigrants from Guatemala, Carlos and Maricruz. Roberto’s parents worked in the textile industry in downtown L.A. and stressed the importance of education to their five children. Roberto learned his work ethic from his parents and applied it to his studies in the Baldwin Park Unified School District, allowing him to attend UCLA after graduating from Sierra Vista High School (1993).

While at SVHS, Roberto was inspired by his students to return to school and earn his Ph.D. In 2005, he enrolled at California State University, San Bernardino (CSUSB) to pursue a master’s and in 2008 Roberto earned a M.A. in Mathematics at CSUSB. After a two-year stint as a math content specialist for San Bernardino City Unified School District, Roberto finally started work towards earning a Ph.D. at the University of Iowa in 2010. Roberto graduated from the University of Iowa in 2015 and has been an Assistant Professor of Mathematics at California State University, Fullerton (CSUF) ever since. He owes his success to the support of his wife and of all of his mentors, including his parents.

Roberto’s dissertation focused in determining universal deformation rings of modules pertaining to finite dimensional algebras arising from representations of the semi-dihedral groups over a field with characteristic 2. He has continued this line of research for other finite dimensional algebras in hopes of understanding universal deformation rings, a tool that has been used to settle many long-standing questions in number theory. Roberto’s background and training as an educator has also influenced his decision to pursue research in determining the best practices for helping university faculty in infusing active learning techniques in their classrooms. His interest in active learning stems from his desire to increase the number of Latinx students who pursue studies in STEM. Roberto hopes that his experience as a mathematician and math educator can help other faculty transform their instruction to best support Latinx students, and students from other historically underrepresented groups, as they pursue careers in STEM.

Roberto’s passion to help his community has also been at the center of his work in providing early research experiences and mentoring for students from underrepresented backgrounds each of the last four summers. His students have conducted research on topics ranging from using differential equations to model the spread of diseases to analyzing single player games such as peg solitaire. In the four years that he has been a faculty member at CSUF, Roberto has mentored 13 Latinx students through these summer research experiences. Of these, 11 have presented their findings at local, regional, and national conferences. All of them are on track to graduate from CSUF and a majority is considering graduate studies in the mathematical sciences. This group of students also gave rise to the newest club in the math department, the PRIME (Pursuing Research in Mathematical Endeavors) Club. Roberto serves as advisor to the PRIME Club, a club whose mission is to support students from historically underrepresented backgrounds in mathematics persist and succeed in STEM careers by introducing them to many research opportunities. The PRIME Club also provides peer mentoring to all of its members and, with encouragement from Roberto, outreach to the local communities by co-hosting events such as Sonia Kovalevsky Day for local high school students.

Roberto also shares his expertise and experiences regularly at the Field of Dreams Conference hosted by the Math Alliance. He is a member of the Pacific Math Alliance, MESCal (Math and Equity in Southern California), and visits local schools to discuss careers in the mathematical sciences. Roberto recently was awarded the College of Natural Sciences and Mathematics Outstanding Teaching award and has co-facilitated workshops in active learning at CSUF and other universities.

“Hispanic Heritage Month serves as a moment to pause and reflect on all of the contributions that we have made to this country. It’s important to highlight these contributions, preferably year-round, as they serve to motivate and inspire the next generation of Latinx leaders.”