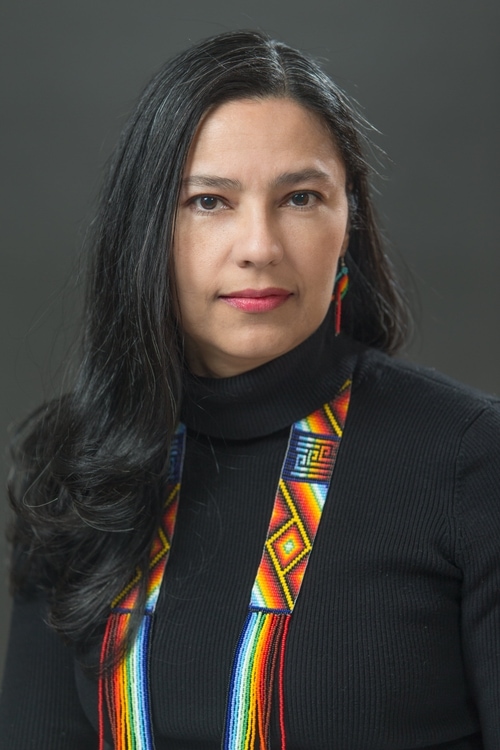 Dr. Maria Mercedes Franco is Associate Professor and Chair of Mathematics and Computer Science at Queensborough Community College –The City University of New York. She has a Ph.D. in Applied Mathematics from Cornell University. She also holds a M.S. in Applied Mathematics from Cornell University and a B.S. in Mathematics from Universidad del Valle (Cali, Colombia). Dr. Franco is a very committed educator, who for nearly 30 years has taught college and high school students at institutions in Colombia, Puerto Rico, and the United States. From giving lectures to organizing workshops to collaborating in undergraduate research programs, Dr. Franco is actively involved in activities that seek to increase the number of women and minorities in STEM disciplines, increase public understanding of and appreciation for mathematics & STEM, and address issues relevant to social justice. She is the author of a forthcoming book chapter entitled “Examining Human Rights through the Lens of Statistics” to appear in Mathematics for Social Justice: Perspectives and Resources for the College Classroom Vol II (Mathematics Association of America Press, projected for late 2019).

Dr. Franco has a long history of participation in NSF-REU programs aimed at increasing the number of women and minorities in the mathematical sciences, starting as a graduate teaching assistant at the inaugural Mathematical and Theoretical Biology Institute (MTBI) at Cornell University and the inaugural Summer Institute in Mathematics for Undergraduates (SIMU) at the University of Puerto Rico-Humacao. She later served as research faculty advisor at the Applied Mathematical Sciences Summer Institute in Cal Poly-Pomona and Loyola Marymount University and as a faculty mentor at the Summer Program for Women in Mathematics at George Washington University.

At Queensborough, Dr. Franco has worked on a wide range of initiatives. From 2006 to 2009, she was co-PI and Associate Project Director for a grant-funded initiative that led to the establishment and institutionalization of Service-Learning as a high impact practice at the college. From 2010 to 2012, she led a departmental, grant-funded initiative that supported the integration of Service-Learning into College algebra and pre-calculus courses. Under the same grant, she worked developing and co-directing the Minority Student Mentoring Program in Mathematics.

From Spring 2014 to Summer 2016, Dr. Franco served as the college’s Coordinator for Undergraduate Research, and in that capacity she: co-led institutional efforts that established undergraduate research as a high-impact practice and launched the research-in-the-classroom modality on campus; was (founding) Campus Director for the CUNY Research Scholars Program. The program funds year-long research opportunities for associate degree students; and represented the college at the CUNY Undergraduate Research Council (CURC). At the department level, Dr. Franco led efforts to establish two research courses in mathematics and helped establish the OUR SUN Award for students engaged in undergraduate research in the mathematical sciences or computer science. From Spring 2014 to Summer 2015, Dr. Franco also served as the college’s Research Integrity Officer. She was instrumental in securing Queensborough’s participation in a 2016-2019 NSF-funded project led by the Community College Undergraduate Research Initiative (CCURI) and is a member of the college’s CCURI Team.

Dr. Franco is a Life Member of the Society for the Advancement of Chicanos/Hispanics and Native Americans in Science, SACNAS, and serves as (founding) faculty advisor for the SACNAS chapter at her institution—a minority serving institution where the student body is about 30% Hispanic/Latino and 25% Black/African American. Through the chapter, she has introduced STEM students and faculty as well as members of the campus and university administrations to the society and to its Diversity in STEM conferences.

Outside of her institution, Dr. Franco holds several leadership and advisory roles in national programs. Since 2015, she is co-PI and co-director of the NSF-REU Mathematical Sciences Research Institute Undergraduate Program, MSRI-UP, in Berkeley, California. She is also co-PI and co-director of the NSF-funded Center for Undergraduate Research in Mathematics, CURM. Although these programs differ in nature and structure, both fund undergraduate research opportunities for students from all types of institutions and both address issues of underrepresentation in the mathematical sciences. Additional efforts to address issues of underrepresentation are channeled by Dr. Franco through participation in activities or service opportunities within SACNAS, the Modern Math Workshops, or the Association for Women in Mathematics (AWM).

Dr. Franco is a member of the inaugural Mathematics Advisory Group for Transforming Post-Secondary Education in Mathematics, TPSE Math. Sponsored by Carnegie Corporation of New York, Alfred P. Sloan Foundation and National Science Foundation (NSF), TPSE Math seeks to advance mathematics education reform efforts across the nation and across all types of institutions of higher education, from 2-year colleges to research universities.

“To me, the Hispanic Heritage Month is a platform that can serve multiple purposes, from showcasing the accomplishments of members of the Hispanic/Latino communities within the mathematical sciences, to helping us recognize and connect with one another, to reminding the larger mathematical communities (from K to 16 to graduate school to academic/non-academic employers and funders) that the gap in participation and opportunities remains large and will continue to be large unless we are intentional and strategic in our efforts to address issues of underrepresentation in the discipline. Lathisms offers a very creative way to help achieve some of these goals.”