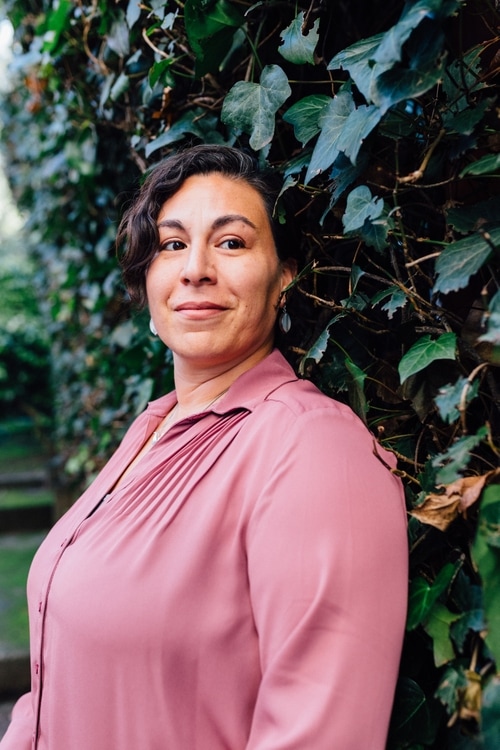 ‍Dr. Maria del Rosario Zavala (she/her/hers) was the first child of her Peruvian immigrant parents to be born in the United States. She grew up in the San Francisco Bay Area and attended UC Santa Cruz, where she earned her B.A. in Mathematics. She almost became a high school mathematics teacher but ultimately decided to teach in elementary school. She has had a variety of teaching experiences in K-12 and spent the last 12 years focused on teacher education.

She is currently an Assistant Professor of Elementary Education at San Francisco State University, where she teaches in the general education and Spanish-bilingual elementary teacher certification program, teaches mathematics methods to special education students, and teaches in the doctoral program for Educational Leadership. Culturally Responsive Mathematics Teaching (CRMT) is at the heart of her mathematics methods classes. She has researched teacher learning around CRMT and strives to transform the experiences of students who don’t see themselves as mathematics people through teachers’ knowledge of effective, responsive, and sustaining mathematics instruction.

She is Principal Investigator on How and When Race Matters when Learning Mathematics, in collaboration with Nathan Alexander at Morehouse College. This project builds on previous work on mathematics identity of Latinx students and is focused on developing a quantitative research tool to investigate high school students’ of all backgrounds perceptions of race-ethnic identities and learning mathematics. Her recent publication in Race Ethnicity and Education is co-authored with Dr. Victoria Hand and focuses on how Latinx students draw on racialized narratives of mathematics achievement to make sense of their own success and challenges in learning mathematics. She also researches on how novice teachers develop competencies in culturally responsive mathematics teaching and teaching for social justice, especially novices who teach in Spanish bilingual settings. She serves on the board of TODOS: Math for All and the Equity Committee of the Association for Mathematics Teacher Educators. She lives in Oakland, California, with her two children and husband, who is a high school mathematics teacher.

Dr. Zavala has advanced work on defining and enacting culturally responsive mathematics teaching. Her publications, along with Dr. Julia Aguirre of the University of Washington Tacoma, both document and describe key aspects of CRMT while also providing empirical evidence of the utility of a tool for teachers to self-assess their ability to plan and enact responsive mathematics lessons. At the heart of this work are the notions of teachers re-affirming their relationship with mathematics, while also adopting cultural humility, so that they may support children to develop their own mathematical ideas. This research has also aided Dr. Zavala in developing a focus for her mathematics methods course for future elementary teachers. With CRMT at the heart, this course helps teachers reconnect with mathematics, rethink their relationship to it, and expand their understanding of the role of race, culture, and social justice in teaching and learning mathematics.

Dr. Zavala is particularly interested in understanding how racial identities and racial stereotypes impact learning mathematics. Building on Critical Race Theory, Latino(x) Critical Theory, and sociocultural learning theories, she proposed a framework for understanding spheres of influence on students’ mathematics identities as they navigate their sense of self, who they are in classrooms, and the role of larger racial narratives of achievement in mathematics. Her work also contributes to theorizing how racial identities play a role for Latinx students, who have most often been characterized as English Learners, with little attention to the intersections of their experiences as raced, gendered, and “languaged” people in the mathematics classroom (to name a few key identities). In this way, her work also calls attention to the damage that racial hierarchies of achievement in mathematics do to all students, and in particular students from brown, black, and indigenous communities. Her recent publication with Dr. Victoria Hand of University of Colorado Boulder in Race Ethnicity and Education illustrates how students recognize, draw on, and challenge racial stereotypes in mathematics to unpack the myth that just working hard enough will result in equal outcomes for all students in math, regardless of race.

“The term Hispanic Heritage Month stirs mixed emotions in me. I’m a scholar focused on race, so I have a lot to say about the term itself. We, as a multitude of Latinx communities in the United States, need time and space to embrace, teach about, and re-energize ourselves around our collective struggle in the United States. However, as a critical scholar I am also wary of the term “Hispanic” and its dubious use in the federal government as a massive ethnic-identity umbrella, versus the term Latinx, which captures both the assertion of a racial identity (versus ethnicity, important for understanding how Latinx peoples are raced and e-raced from membership in the United States), and the advancement of a gender-nonbinary definition of peoples. Ultimately, I think this month is about the visibility of the Latinx community, and lifting each other up, while we strive to address the issues in our communities that hold us back from fully realizing ourselves, including the legacies of colonialism, colorism, and patriarchy.”