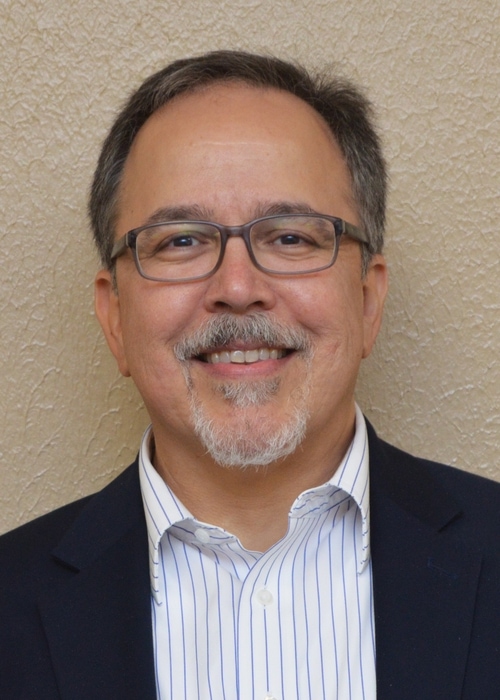 Professor
The University of Texas at Arlington
PodcastWebsitePoster

‍James A. Mendoza Álvarez grew up on his family’s farm near Saspamco, Texas, south of San Antonio. The story of his great grandparents’ walk across the border from Mexico in 1890, and their tenacity in saving for ten years to purchase this “rancho” on wages of 25 cents per day in a nearby brick factory, grounded his upbringing in the values of perseverance and hard work. Both his father, who emigrated from Spain in 1963, and his mother were school teachers who prioritized pursuit of higher education. His mother’s passion for teaching highly influenced his own desire to be an educator. He excelled at mathematics and enjoyed being well regarded as a musician in his community, regularly playing the piano/organ at church and trumpet in school and college. Being the fourth of six siblings to attend college, he enrolled at Texas A & M University-Commerce on a Presidential Scholarship in 1984. In 1987, just three years after having graduated valedictorian of Floresville High School, he earned a bachelor’s degree with Academic Distinction in mathematics and physics. In 1996, he completed his dissertation, “Percolation on the Randomized Sierpinski Carpet,” in mathematics under Dr. William Beckner at The University of Texas. His passion for issues related to equity and access in mathematics fueled his move to research in mathematics education. Thus, immediately after completing his Ph.D., Dr. Álvarez took a post-doctoral position in mathematics education at the Charles A. Dana Center to work with Dr. Uri Treisman. Dr. Álvarez is currently a Professor of Mathematics and Distinguished Teaching Professor at The University of Texas at Arlington and Graduate Director of the M.A. in Mathematics Program for secondary mathematics teachers. He is happily married to Dr. Minerva Cordero (also a mathematician) and they have two grown sons, Alex and Nicholas.

Dr. Álvarez’s research and professional interests are in mathematics education with a focus on mathematical problem solving, mathematics-specific technology, increasing access to mathematics through improved preparation of mathematics teachers, program development, and curriculum development. In the K-12 setting, he has been an essential contributor to the development and enhancement of mathematics standards and assessments for students and teachers. His work, especially in Texas, spans over two decades and includes serving as a writer of the Commissioner’s Draft of the Texas Mathematics Standards in 2011 and also serving as an expert reviewer of the Texas Essential Knowledge and Skills (TEKS) in mathematics in 2005 and 2006. Most recently he served as a writer for the TEKS for two new high school courses in Algebraic Reasoning and Statistics. From 2007-2010, he served on the College Board’s Advanced Placement Calculus Test Development Committee.

Dr. Álvarez is an advocate for increasing access to STEM by improving teacher preparation, facilitating professional development opportunities for teachers, and promoting programs that enhance mathematical experiences at the K-12 and college level. He currently serves on the Board of Directors for the Mathematical Association of America (MAA) and on the Board of Directors for the Conference for the Advancement of Mathematics Teaching (CAMT). Throughout his career, Dr. Álvarez has worked on several initiatives aimed at increasing the number of historically underserved populations in the mathematical sciences, including working extensively with the Emerging Scholars Program (ESP), which focuses on increasing success rates in calculus, especially for Latinx and African American students. Dr. Álvarez has provided professional development for hundreds of faculty and graduate students nationwide on the ESP program. He is a lead co-author on the Classroom Practices chapter in the MAA Instructional Practices Guide.

His research and teaching have been supported by grants from the National Science Foundation, the US Department of Education, the Texas Education Agency, and the Texas Higher Education Coordinating Board. These grants, totaling over $12 million, support projects which include efforts aimed at increasing teacher content knowledge in mathematics, increasing student retention in gateway courses such as calculus and precalculus, linking mathematics taught in the K-12 schools to research in mathematics, and designing materials to support standards-based mathematics teacher preparation. His current research as a principal investigator on The Mathematical Education of Teachers as an Application of Undergraduate Mathematics (META Math) project aims to enhance the undergraduate mathematics curriculum through the development of research-based lessons that explicitly connect advanced undergraduate mathematics to school mathematics. He is a six-time recipient of a UT Arlington Provost’s Research Excellence Award in the College of Science.

Dr. Álvarez serves on the SACNAS Distinguished Awards committee, as well as the nominations committee for the MAA. His contributions in service to the MAA have been recognized by receiving the 2017 Texas Section of the MAA Distinguished Service award as well as the 2017 MAA Certificate of Meritorious Service. To recognize his contributions to the improvement of mathematics education at the state and national level, the Texas Council of Teachers’ of Mathematics awarded him the 2017 E. Glenadine Gibb Achievement Award.

“Hispanic Heritage Month highlights the important, complex history and contributions of Hispanics in our country. In my own ancestry, I have Tejanos in which the border crossed them in 1830s, Mexicans who crossed the border in the 1850s and 1890s, and my father who left Spain in 1963. My parents always emphasized the power of knowledge and facts in combating racism. Thus, I always viewed knowing our history as an integral part of helping others understand the rich contributions Hispanics have made to this country from cowboy traditions in the southwest to a current day Supreme Court justice.”