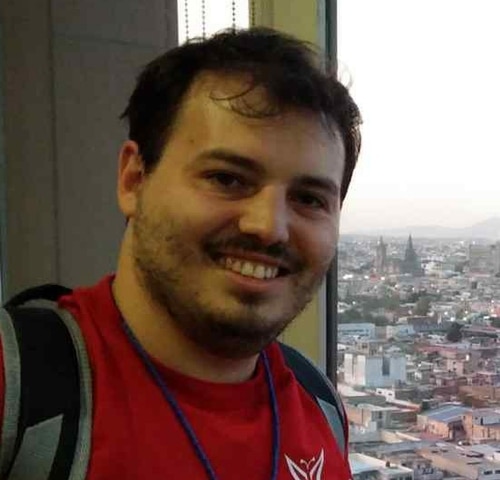 ‍Enrique Treviño grew up in the Cd. Juárez-El Paso border. He earned his baccalaureate degree in mathematics at the University of Texas at El Paso in 2006. He commuted between Mexico and the USA daily during his undergraduate studies. Enrique got his Ph.D. in mathematics (Number Theory) from Dartmouth College under the guidance of Carl Pomerance. He worked two years at Swarthmore College as a visiting assistant professor and has been a professor at Lake Forest College since 2013. He was an assistant professor from 2013 to 2018 and has been an associate professor since 2018. Enrique became interested in mathematics as a career, thanks to the Mexican Mathematical Olympiad. He participated as a student in 2000 and 2001. He has been participating as either a coach or coordinator most years since.

His main research interest is number theory. His doctoral dissertation is titled “Numerically Explicit Estimates for Character Sums;” it involves a blend of analytic number theory and some serious computing. He has worked on problems such as estimating the least quadratic non-residue modulo a prime, the least inert prime in a real quadratic field, and other concrete inequalities. Besides number theory, Enrique also writes recreational mathematics papers. Enrique cares deeply about undergraduate research, working every summer with undergraduates on research projects. He has coauthored five papers with undergraduate students.

With respect to teaching, Enrique has taught nearly two dozen different courses in college, including: Programming, Calculus, Abstract Algebra, Combinatorics, Number Theory, and Recreational Mathematics. He likes to incorporate ideas from recreational mathematics in all classes he teaches to try to get students to see the fun side of mathematics. He also likes to teach at summer math camps (such as Awesome Math or Ross Asia) for middle school and high school students.In terms of service, Enrique is an associate editor of the College Mathematics Journal, referees half a dozen papers a year and works for the Olympiad (as listed above).

“I greatly enjoy reading about the achievements from other Hispanic mathematicians. My favorite part of Lathisms has been the podcast. It is great to hear about the life of other mathematicians, to listen to the struggles on their path and their resilience, and to hear the joy mathematics brings to them.”