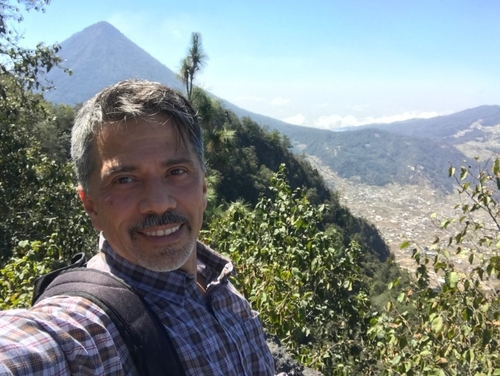 Carlos A. LópezLeiva was born in Guatemala to Luz del Carmen Leiva Vásquez and Carlos Alfonso López Marckwordt. Carlos grew up in Quetzaltenango City, commonly called Xela. Xela, with over half a million people (predominantly from Mayan K’iche and Ladino-mestizo-backgrounds), is a town in the western highlands of Guatemala. With K’iche, Mam and Spanish being the official state languages, Xela includes a diverse cultural and linguistic mixture since pre-Columbian times. Surrounded by mountains and seven volcanoes, including an extinguished one (Cerro Candelaria or “La Muela”), Xela nurtured Carlos’ love for nature and hiking. La Muela has deep roots linked to Xela’s history and it is Carlos’ favorite space on earth, which he visits every chance he gets. Carlos graduated as an elementary school teacher and later on as a secondary school teacher. Carlos taught for 15 years in elementary and secondary school in Guatemala. First grade was his favorite grade to teach and Geography and Mathematics his favorite subjects to learn and teach. Years after completing a BA in Educational Psychology, Carlos moved to the U.S., to Chicago, where he received an M.Ed. in Bilingual Special Education and a Ph.D. in Curriculum and Instruction with emphasis in Bilingual Mathematics Education. Carlos argues that earning a doctoral degree was never in his plans, but his advisor, Dr. Lena Khisty, saw beyond and encouraged him to pursue such a career. Carlos met Dr. Khisty and Dr. Mónica García in Chicago, and they became an important influence in Carlos’ life. “While I was not born a Chicano, my heart is! I think I got it from Dr. Khisty and Mónica,” Carlos mentions. Living in Chicago gave Carlos a firsthand opportunity to learn about the life of the Hispanic/Latinx population in the U.S. Since then, his work has focused on this population. Carlos still works with Guatemalan teachers.

Carlos A. LópezLeiva is an Associate Professor in Bilingual and Mathematics Education in the Department of Language, Literacy, and Sociocultural Studies at the University of New Mexico (UNM). Carlos is a bilingual (Spanish-English) Latinx person and a former elementary and secondary school teacher. Carlos’ work focuses on teaching and learning ecologies in intercultural educational spaces—regarding dynamics of social interactions, language uses and ideologies, task designs, relationship development, as well as what counts as mathematics—and how they mediate members’ participation in and meaning making of mathematical practices, activity, and perceptions of self. His research includes three foci: (1) Issues of Equity and Social Justice in Social Interactions, (2) Out-of-School Interdisciplinary Mathematics Teaching and Learning, and (3) In-School Interdisciplinary Mathematics Teaching and Learning. With a background in Special Education and Educational Psychology, Carlos is a former Family Literacy Aprendiendo, Mejorando and Enseñando (FLAME), with Dr. Flora Rodriguez-Brown and Center for the Education of Mathematics of Latinas/os (CEMELA) fellow who in 2011 graduated from the Curriculum and Instruction Ph.D. program with emphasis on Bilingual Mathematics Education at the University of Illinois at Chicago. Carlos teaches several courses at UNM graduate and undergraduate programs. A selected list of courses includes Culture, Language, and Mathematics; Exploring Third Spaces in Education; Literacy across Cultures; ESL across Content Areas; and Teaching Mathematics in Elementary School. Carlos advises doctoral and masters students in his department. Currently advising 10 doctoral students, LópezLeiva has previously advised some impressive graduates including Yuliana Kenfield, Rijasoa Andriamanana, Ahmed Khawaji, and Ahmed Al Shlowiy. Moreover, Carlos’ work has transferred and been supported through several collaborative research projects. He has participated in two NSF-funded projects: “Access, Agency, and Allies in Mathematical Systems (A3IMS)” (award #: DRL-1417672) together with faculty from six national universities; and the “Broadening Participation of Latina/o Students in Engineering Using an Integrated Mathematics, Engineering and Computing Curriculum in Authentic, Out-of-School Environments” (award #: DRL-1613637) program co-developed with Drs. Sylvia Celedón-Pattichis and Marios Pattichis at UNM. Through the “Teacher Education Collaborative in Language Diversity and Arts Integration (TECLA)” project with in- and pre-service teachers and seven UNM faculty, Carlos has co-developed and co-implemented culturally responsive subject-arts integration, especially mathematics, education at an elementary school with culturally and linguistically diverse students from international and local U.S. Southwestern backgrounds.

“Being Hispanic or Latinx is part of being in the U.S., which at the same time acknowledges a background that often linked to a language and culture, even though it relates to multiple languages and cultures. I think that this month is trying to help us feel that who we are everyday matters. And who we are should be nurtured and developed as we actively participate with others in a plural society where being different from one another only means a chance to learn, collaborate, and grow with each other.”