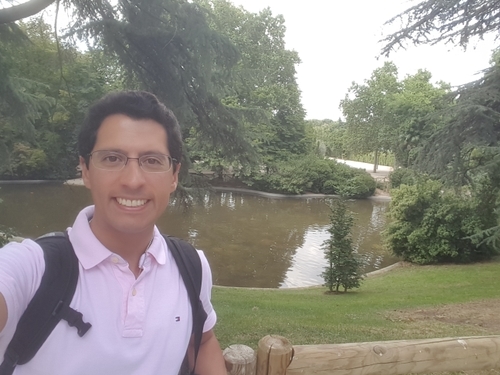 Pablo Raúl Stinga is an Assistant Professor of Mathematics at Iowa State University (ISU) (since 2015). He is originally from Argentina and has mainly Italian as well as Spanish heritage. He obtained his degree in Mathematics (Licenciatura en Ciencias Matemáticas) with honors at Universidad Nacional de San Luis, in Argentina. He attended graduate school at Universidad Autónoma de Madrid (UAM), in Spain.In his first year in Spain, he received his Master’s in Mathematics and Applications. Stinga obtained his Ph.D. in Mathematics with European Mention at UAM under the direction of José L. Torrea in 2010. He then became a researcher at Universidad de Zaragoza (2010)and at Universidad de La Rioja (2011-2012), both in Spain. In 2012,he was appointed R.H. Bing Fellow Instructor No.1 at The University of Texas at Austin, where he worked in collaboration with Luis A. Caffarelli. As a faculty member at UT Austin, he was awarded the Clock Award from the Services of Students with Disabilities twice. He organized the first Nonlocal School on Fractional Equations 2017 at ISU. He was a plenary speaker in the first joint meeting between the Royal Spanish Mathematical Society (RSME) and the Argentinean Mathematical Union (UMA) in December 2017. At the present time,Stinga is directing two doctoral dissertations, one of his Ph.D. students is a woman. He organizes the Colloquium Series in his Department and a joint graduate student analysis seminar between ISUand the University of Nebraska-Lincoln. He is also a founding faculty member of ISU social club “LAZOS.” This is a group of Hispanic/Latino male professors at ISU who identified a gap in their own college experience and decided to do something different for the ISU community. Monthly reunions are held with Latino students at ISU to develop friendship and encourage success by getting to know their professors and peers.

Stinga works in the broad area of analysis, with main focus in harmonic analysis and partial differential equations. More precisely, the analysis of fractional and nonlocal linear and nonlinear elliptic and parabolic PDEs, including discrete nonlocal equations, free boundary problems,and the harmonic analysis of orthogonal expansions, singular integral operators, related functional spaces and geometry of Banach spaces.One of his first main contributions (product of his Ph.D. dissertation) is the extension problem characterization for fractional powers of linear operators in Hilbert and Banach spaces.To obtain these results, he developed the method of semigroups for fractional nonlocal equations, which is a general, widely applicable tool to analyze fractional powers of operators. His ideas are being applied in regularity theory, functional analysis, numerical analysis, mathematical biology, free boundary problems, optimization and optimal control, just to mention a few. He has studied regularity estimates for nonlocal PDEs, nonlocal Monge-Ampère equations and free boundary problems, fractional derivatives, nonlocal equations on manifolds, as well as mixed-norm weighted estimates for parabolic equations, finding new estimates for the classical heat equation. Stinga has also introduced the nonlocal Keller-Segel model of chemotaxis, which is of interest in biology. He has worked on harmonic analysis for orthogonal polynomials (Jacobi, Hermite),special functions (Bessel) and Schrödinger operators. His broad interests as a scientist lead him to work on the area of philosophy of logic, writing a first paper on the famous “Hardest Logic Puzzle Ever” by George Boolos. Stinga collaborates with a wide range of scientists with different backgrounds, ranging from well-established senior mathematicians to researchers at the early and mid-stages of their careers, graduate students, and even a fellow philosopher. His collaborators have diverse cultural backgrounds, are both men and women, and represent a large variety of different nationalities(Argentina, China, Hungary, India, Italy, Jordan, Poland, Spain, UK,USA).

“I believe that a healthy society should be aware of the amazing and beautiful cultures there are around the globe. Present day technologies permit us to discover how wonderfully the human nature has flourished in unexpected ways. In just seconds, we can connect with remote parts of the earth and discover formidable, unique people. As an Argentinean scientist, coming from the south end of the world, I am deeply honored to participate in Hispanic Heritage Month. I want to be instrumental in sparking this awareness and help bring attention to what “Hispanic” really entails, as well as the beauty and depth of the human and cultural values of my country.”