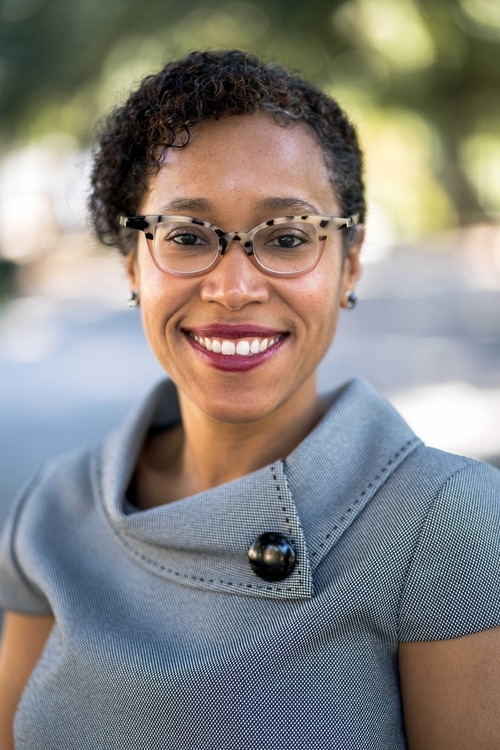 Omayra Y. Ortega is an assistant professor of mathematics & statistics at Sonoma State University in Sonoma County, California, and the newsletter editor for the National Association of Mathematicians(NAM). She held her first teaching position at Arizona State University, where she worked for nine years and was recognized with many teaching and mentoring awards including the ASU Centennial Professor Award in 2012. She later held a visiting position at Pomona College, her alma mater, before landing her current position at Sonoma State. Dr. Ortega is originally from Far Rockaway, Queens, New York, and has lived and worked all over the world including Boston,Massachusetts; Los Angeles, California; Cairo, Egypt; Iowa City,Iowa; Dublin, Ireland; and Phoenix, Arizona. She earned her Ph.D.(2008) and an M.S. (2005) in applied mathematics and computational sciences from the University of Iowa, where she also was awarded her Masters of Public Health. She earned a B.A. in music performance and B.A. in pure mathematics from Pomona College in 2001. Her scholarly interests reflect her expertise in mathematics: mathematical and computational biology, mathematical epidemiology in developing countries, infectious disease epidemiology, and the participation of women and minorities in sciences. Regarding the latter, she has organized an annual Sonia Kovalesky High School Mathematics Day at several institutions including the University of Iowa, Arizona State University, and Pomona College in recognition of the day’s namesake, who was the first woman to receive a Ph.D. in mathematics.

Dr. Ortega's research in mathematical epidemiology is solidly grounded in the public health problems of our world. Using mathematical modeling and the theoretical core of mathematics as tools, she is able to better understand and describe emergent health problems such as HIV, HPV, rotavirus, malaria, polio, and TB. Dr. Ortega collaborated with the Irish Ministry of Health on a study to quantify the number of Irish children living with guardians who are drug and/or alcohol abusers,and with the Egyptian Ministry of Health to determine the efficacy of the Rotavirus Vaccine on the Egyptian public. Dr. Ortega's contributions to science and society improve the health community’s understanding of infectious diseases and inform policy makers on how these diseases can best be controlled at the population level.

In order to be well prepared to contribute to this field of mathematical epidemiology, she simultaneously studied both applied mathematics and public health. Dr. Ortega received a Master’s in Public Health(MPH) in December 2005, and a Ph.D. in Applied Mathematics and Computational Science in August 2008. During her time as a healthcare analyst at Health Services Advisory Group, the nation’s largest External Quality Review Organization (EQRO), Dr. Ortega contributed to a high number of research papers that dictated public health policy and had direct impact on communities across the United States.At the request of the federal Centers for Medicare and Medicaid Services (CMS), various state Departments of Health, and many state offices of Medicaid, she conducted statistical analyses of Medicaid and Medicare data. Though this work using data science to investigate the impacts of health interventions on sub-populations of interest were not published in peer-reviewed journals, the results of these endeavors were immediately applied to the communities studied. Dr.Ortega applies the techniques from analysis, statistics, stochastic and differential equations-based modeling of rotavirus to the study of Human Papillomavirus (HPV). She actively looks for new, neglected,or re-emerging diseases, such as Ebola and Dengue Fever, where these techniques can be applied. She intends to continue the practice of including undergraduate students in her research, as it is an opportunity for mentorship and academic growth that is essential for the undergraduate experience.

“For me,Hispanic Heritage Month is a time to remember the cultures that havesustained and nourished us along our way. I look forward to this timeof year to give thanks to my Panamanian heritage, full of reggeaton,sancocho (soup), tortillas and tamales (every country has a differentway of making these), molas, and family! I am especially thankful formy grandmother, Carmen Duesbury, the matriarch of my family. We allinherited her legacy of stubborn determination, fiscalresponsibility, and family celebrations!”