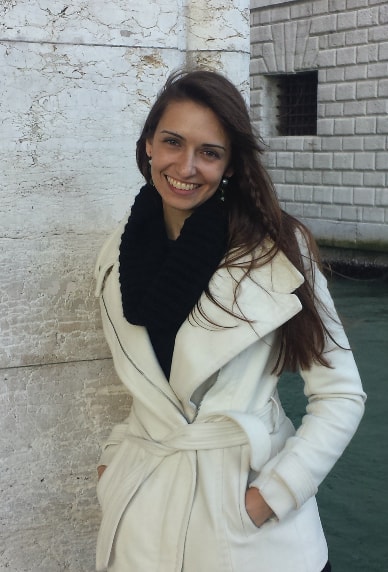 Mariana Smit Vega Garcia was born and raised in Sao Paulo, Brazil. She received her bachelor’s and master’s degrees in Mathematics from the Universidade de Sao Paulo in 2006 and 2008, respectively, and moved to the US in 2009 to start her Ph.D. at Purdue University, which she concluded in 2014. She had postdoctoral appointments at Heinrich Heine University and the University of Duisburg-Essen, both in Germany, working with Georg Weiss, and at the University of Washington, where she worked with Tatiana Toro. Her awards include an Institut Mittag-Leffler Postdoctoral fellowship grant, an AWM-NSFTravel Grant, a UW Office of Postdoctoral Affairs Travel Award, an AMS Grad Student Travel Grant, two teaching awards and two grants from the Sao Paulo Research Foundation (FAPESP). She is starting a new job as an Assistant Professor at Western Washington University in the Fall of 2018.

One of the central themes in Analysis is the relationship between solutions to partial differential equations (PDEs) and the domains where they are defined. Her research focuses on questions arising in free boundary problems and geometric measure theory in which the key goal is to understand this synergy. In broad terms, free boundaries appear when the solution to a problem consists of a pair: a function, often satisfying a partial differential equation, and a set associated to this function. Perhaps one of the most renowned examples of a free boundary problem is the obstacle problem, which consists of finding the equilibrium configuration of an elastic membrane constrained to lie above a rigid profile (the obstacle), and whose boundary is held fixed. The free boundary is the boundary of the coincidence set (the set where the solution touches the obstacle). The obstacle problem is still at the forefront of current mathematical research, finding its deepest motivations in the applied sciences (in potential theory,fluid filtration in porous media, constrained heating, elasto-plasticity, optimal control, and financial mathematics).Understanding the regularity of a solution and the geometry of special sets related to this solution are central questions which play a pervasive role in countless applications. Her current research program focuses on studying these two questions in three different settings: nonlinear elliptic equations, nonlocal equations and almost minimizers with free boundary, all of which have far-reaching applications in other fields.

“Having heard so many of my students describe how much of a difference it made for them to see a Latina woman in Mathematics, it is such an honor to be a part of this fantastic initiative to showcase the contributions of so many talented mathematicians from underrepresented groups. We all belong in Mathematics!”