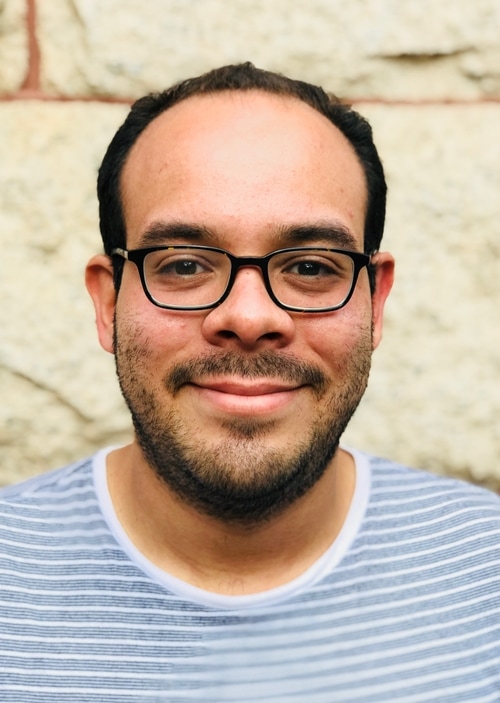 Marco Aurelio Mendez Guaraco was born in Caracas, Venezuela, and raised in the port city of Puerto La Cruz. He spent his undergraduate years at Universidad Simón Bolívar, where he started learning differential and algebraic topology under Professor Lázaro Recht. He participated in the Instituto de Matemática Pura e Aplicada (IMPA) summer program in Rio de Janeiro, Brazil. He stayed in IMPA and completed his master's and doctoral degrees under the guidance of Professor Felipe Linares and Professor Fernando Codá Marques, respectively. Guaracois currently a L. E. Dickson Instructor in the Department of Mathematics at the University of Chicago. During the fall of 2018, he will be a member of the Institute of Advanced Study, in Princeton,New Jersey. When Guaraco is not working on Mathematics, he shares his spare time between music (trying to play the rhythms he learned to love in Brazil), cooking (exploring his family recipes with long-distance advice from his mom and grandma) and photography(taking pictures wherever Mathematics takes him).

Marco is grateful to see the world from the point of view of a Latin American.He thinks there is a certain feeling that comes with it, portrayed on a large scale through the kinship between our nations and the world.There is a general feeling of hope that makes it implicit that we will always help each other. He hopes to continue to bring that spirit to the mathematical community.

Guaraco’s research focuses on geometric analysis, specifically the connection between a group of geometrical objects, called minimal surfaces, and an analytical object, the Allen-Cahn equation, originally conceived as a description for the process of phase transitions in different metal alloys. Minimal surfaces are the critical points of the area,which means their area has first order term equal to zero with respect to any deformation. Perhaps this does not mean much at first,but minimal surfaces are familiar to us because they relate to soap films. When a soap film is closed, for example, when it floats by itself in the air, it becomes a bubble. A bubble is a sphere, an example of a surface with constant curvature. The key observation is that the curvature of a bubble, depends not only on physical properties, such as its elasticity, but also on the difference of the air pressure from the inside and the outside of the bubble. In contrast, when a soap film is not closed, for example, if it is bounded to a metal loop, there is no difference in air pressures,because the air is the same on both sizes. In this case, the mean curvature is zero, which is another characterization of minimal surfaces. Similar behavioral properties are observed when two materials in different states of matter share a common space. This is in part described by the theory of phase transitions, in the study of interactions between metal alloys. Under ideal conditions, these two materials will form bubbles with one of them floating inside of the other. In this case, the transition region (the layer separating both materials) is also a surface with constant curvature. One could adjust the phase transitions theory to exclusively describe minimal surfaces. These connections were first made around the late 1970s, at least in respects to geometric analysis, by the Italian mathematician Ennio De Giorgi. Over the last two decades, the understanding of both phase transitions and minimal surfaces has advanced greatly,refreshed by new ideas and methods. Yet, there are still many basic questions to answer about these objects and the connections between them.

“I am grateful for this initiative and honored to be a part of it. Thinking about my cultural heritage is always bittersweet, especially with regards to the Venezuelan mathematical community. In Venezuela, like many parts of Latin America, people live with the certainty that tomorrow will be as difficult as today, only hoping it won't deteriorate further. This is exacerbated in Venezuela by the radicalism of the government. Universities, generally a fertile ground for talented minds advancing knowledge, end up being punished through the lack of public funding. Most professors and students have fled the country in search of a better life. I hope sharing our stories through this platform helps to inspire young mathematicians,especially those in difficult situations.”