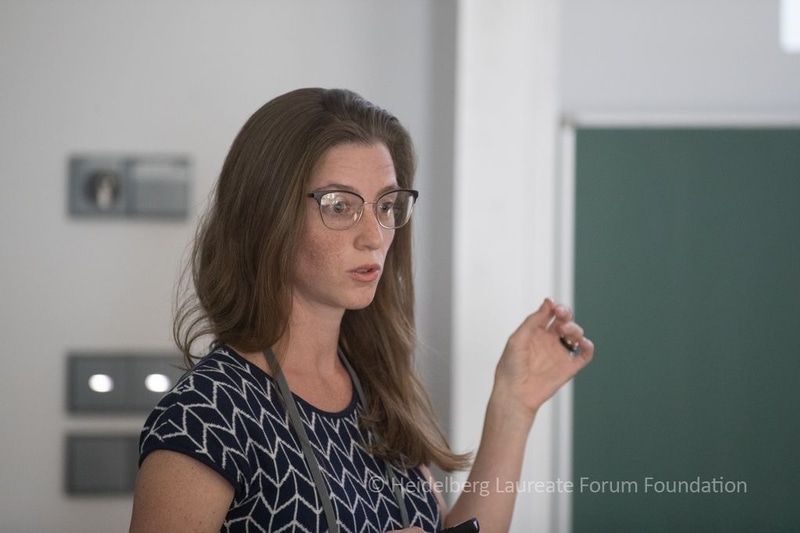 Julia Plavnikis an Argentinian mathematician born in Córdoba. She received her Ph.D. from Universidad Nacional de Córdoba in 2013. She was a CONICET postdoctoral fellow in Argentina (Universidad de Buenos Airesand Universidad Nacional de Córdoba) before obtaining a Visiting Assistant Professor position at Texas A&M University until July 2018. Currently, Plavnik is a Charlotte Ann Griffin Assistant Professor at Indiana University in Bloomington. She has been mentoring undergraduate students during the past years and, in the summer of 2017, Julia led an REU in Mathematics of Topological Quantum Computation at Texas A&M. For Plavnik , diversity,equity, and inclusion are crucial in her academic career path. She is committed to increasing the presence of women and other under represented groups in science, as well as to promote mathematics in Latin America. She has been a mentor for first-generation and LGTB students and has collaborated with the AWM chapter in Texas A&M. Plavnik is co-organizing a CIMPA Summer School in Colombia in 2019,and she will be leading a project in the WINART (an AWM-sponsored Research Network) Workshop in 2019. Julia feels very lucky to be part of a nice mathematical community and to have found a lot of friends among her collaborators, which makes her job not only interesting but also fun. Outside of work, Plavnik enjoys the arts in all its forms. She loves sharing time with her family and friends, dancing(especially tango and salsa), traveling, and getting to know new people and cultures. With her husband, they like cooking, playing board games, and outdoor activities, particularly rock climbing. Plavnik met her husband, Mario Di Salvo (a postdoctoral researcher at UT Southwestern Medical Center) during college and after being friends for some years they started dating. Now, they are happily expecting their first daughter.
‍
Plavnik's research focuses on algebraic manifestations of quantum symmetries,more specifically from the point of view of representation theory,category theory, and non-commutative and homological algebra.Classically, the notion of a group describes symmetries in mathematics. In recent decades, there have appeared certain quantum objects whose symmetries are better described by group-like objects called tensor categories. Tensor categories can be thought of as a categorification of rings. Some examples of these quantum objects are subfactors, quantum groups, Hopf algebras, and topological phases of matter, among others. Quantum symmetries are fascinating since they bring together many different areas of mathematics and have applications in a diverse range of settings across mathematics and physics, including low-dimensional topology, representation theory,condensed matter physics, topological quantum computation, and quantum information.

“I feel very proud of my Latin American heritage and very grateful for the education and opportunities that I received in Argentina. I have had caring and generous mentors and colleagues that have helped me during these years. I feel that now it is my turn to support others as they navigate the obstacles and overcome the difficulties they encounter in their path.”