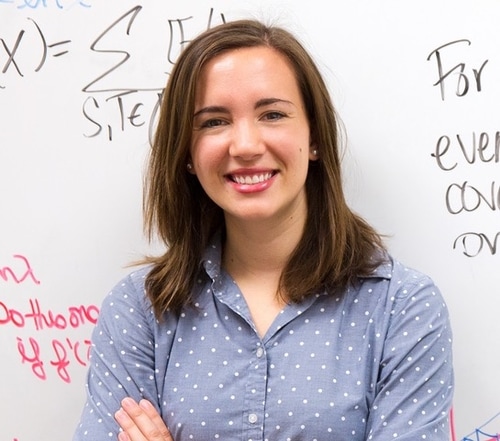 Jessica DeSilva is an Assistant Professor in the Department of Mathematics ather alma mater, California State University, Stanislaus. Daughter of a dairyman and elementary school librarian, Jessica grew up in Hilmar, California, a small town largely made up of immigrants from Mexico or the Azores islands of Portugal. Although college and the study of mathematics in particular was a mystery to her Azorean parents, she owes her accomplishments to their unwavering love and support. Through her participation in the McNair Scholars Program and MSRI-UP, De Silva connected with a number of mentors in the mathematical community who guided her to and through graduate school.As a graduate student, she met lifelong collaborators participating in the Graduate Research Workshop in Combinatorics as well as mentoring for the Summer Undergraduate Applied Mathematics Institute.Her work with high school math teachers and McNair Scholars exposed how her role as a mathematician can make an impact—big and small—for first-generation students and students of color. De Silva was an NSF Graduate Research Fellow and recently received her Ph.D. from the University of Nebraska-Lincoln in August 2018 under the supervision of Jamie Radcliffe. She is looking forward to starting her new faculty position at CSU Stanislaus, a proud Hispanic-Serving Institution, where she can share the beauty of mathematics with first-generation and underrepresented students.

De Silva's research interest lies in the area of discrete mathematics, with a particular emphasis on extremal graph theory. Graphs are often referred to as networks in other disciplines, such as computer science, and can be visualized as you would a molecule in chemistry.In combinatorial graph theory, we are often interested in counting parameters of graphs. In her recent work, De Silva is interested in parameters which count the number of spanning substructures of a graph. A canonical example is that of the number of spanning trees in a graph which can be counted by computing the determinant of a matrix using the Matrix Tree Theorem. The term "extremal" comes from the more precise question of which graphs attain the extreme values (i.e., maximum or minimum) of these parameters. These are often fix or bound other parameters of the graphs considered, such as the number of vertices and number of edges. De Silva's research interests also intersect with theoretical computer science as she has investigated the algorithmic complexity of graph and hypergraph problems.

“To me, Hispanic Heritage Month showcases mathematicians who not only have accomplishments deemed worthy of praise by the mathematical community as a whole, but also whose roles in leadership and mentorship make waves in creating pathways for present and future Hispanic/Latinx mathematicians.”