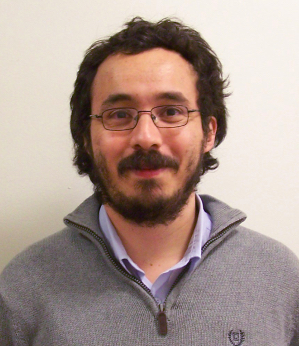 Iván Contreras was born and grew up in Bogotá, Colombia. He got his undergraduate degree in Mathematics from Universidad de los Andes in 2008, a master’s degree from University of Utrecht in 2009 and he completed his Ph.D. studies at University of Zürich. He held postdoctoral positions at University of California, Berkeley (as a Swiss National Foundation fellow) and University of Illinois at Urbana-Champaign,before joining the Department of Mathematics and Statistics at Amherst College as a Visiting Assistant Professor. He has been actively involved in mentoring both undergraduate and high school students who share his passion about math and applications to real-life problems. His undergraduate research project on quantum mechanics on graphs and CW-complexes has been awarded the Illinois Geometry Lab prize for exemplary research. The results of this project have been presented in conferences at Harvard, UCLA, and the Joint Mathematics Meetings in San Diego, among others.

His research focuses on mathematical physics, in particular the interface between geometry, topology and physics. He studies particular types of classical and quantum field theories, which carry both geometric and topological information. Contreras has made important contributions to the Poisson sigma model, a two-dimensional string theory, by using field-theoretical methods to approach two problems in mathematics: the integration of Lie algebroids (a parametrized version of a Liealgebra) and the Kontsevich deformation quantization of Poisson algebras. One of his recent results is a generalization of the Hurewicz theorem in topology to the setting of Lie groupoids, and his current research projects include a geometric description of the Fisher index in quantum information theory, and the C*-algebra quantization of Poisson structures.

“I have been inspired by Hispanic Heritage Month during the past two years. It is rewarding to read the accomplishments of many Latin@s and Hispanics in STEM. It is an honor for me to participate on this initiative, and I thank Lathisms for promoting the work of mathematicians from our community. “