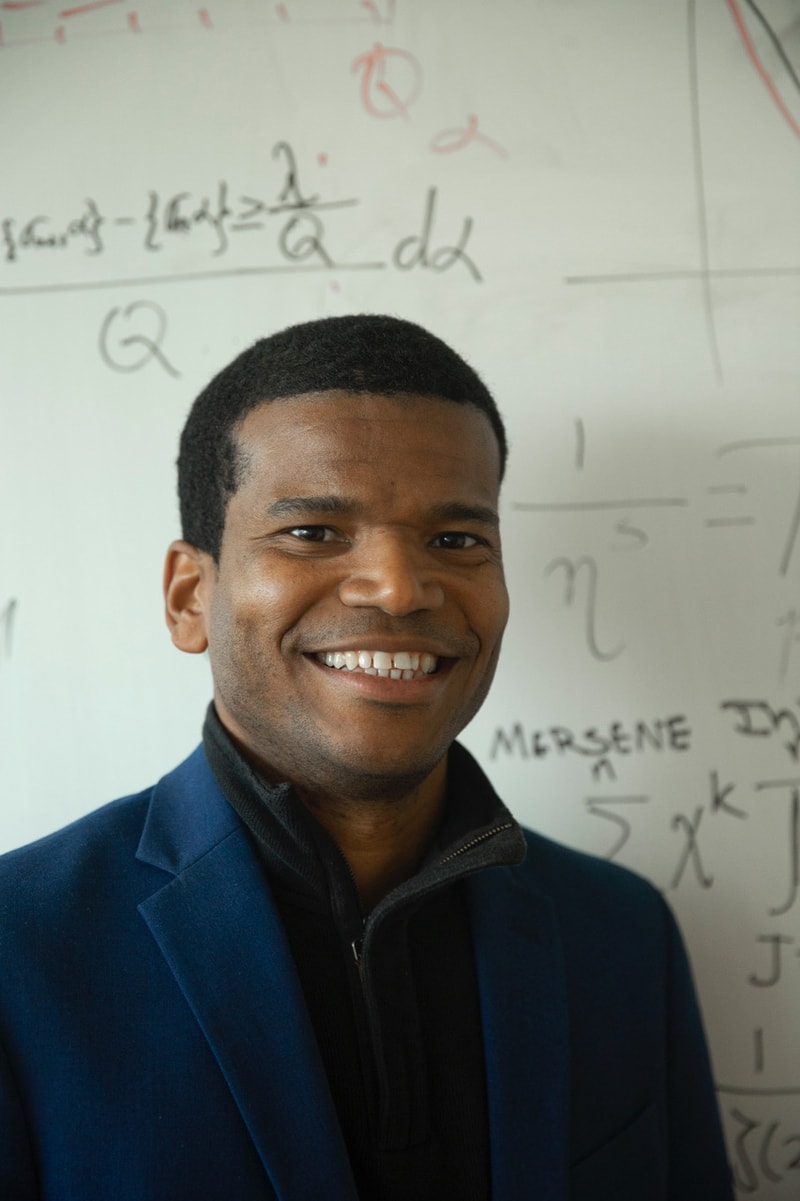 The Dominican Republic is the birth place of the first University of the Americas, Universidad Autónoma de Santo Domingo (UASD). Founded in 1538, it has been said that it took them close to 500 years to graduate the first mathematician. The career of pure mathematics was created in the 1990’s and in the spring of 2003, Geremías Polanco Encarnación stood as the only student of pure mathematics in the graduating class. Polanco Encarnación  discovered his passion for mathematics while helping fellow senior high school students and while volunteering as a tutor in the poor community where he grew up.A few years after his graduation, Polanco Encarnación received a Fulbright scholarship to pursue graduate studies in the USA, and he graduated from the University of Illinois at Urbana-Champaign in 2012 with a Ph.D. in mathematics. His doctoral thesis was in number theory, and his advisor was Dr. Kenneth Stolarsky. Today, Dr. Polanco works as an assistant professor of mathematics at Hampshire College,a member of the Five College Consortium in Western Massachusetts. His contributions in the areas of teaching, advising, research and service is a valuable help in the fulfillment of the college’s mission. In particular, he has contributed to the development of mathematics at Hampshire together with Dr. Sarah Hews, and their dedicated work has made this area become one of the top 25 concentrations chosen by Hampshire students. Dr. Polanco has also been involved in the development of mathematics in the Dominican Republic. He is the PI for a research grant in number theory aimed to help develop professors from the local university to become Ph.D. candidates in a soon-to-start Ph.D. program. He has helped organize several research conferences in number theory, and as a Green-16PNExT fellow, he contributed to the organization of several JMM workshops.

One of the areas of Polanco Encarnacion’s research work is Combinatorial Number Theory. In this field, he has worked specifically with Sturmian Sequences. Sturmian sequences are non-periodic sequences of minimal complexity. They provide a mathematical model for quasycrystals, a 2011 nobel-prize winning discovery (quasycrystalsare a promising discovery for different areas in modern industry because of their light absorption, adhesion and friction reduction properties, poor heat conduction and their potential for use in compound reinforcing for mechanical tools. Promising areas of applications include the reinforcement of medical instruments and culinary tools). These sequences also have applications to dynamical systems, pattern recognitions, computer graphics, music and biology,among others. The key feature that makes Sturmian sequences so versatile in their application is the fact that these sequences can be defined in many different ways. Each of these ways of defining Sturmian sequences is matched with applications that best fit it.Thus, finding new ways of defining these sequences is central to better understanding their applications and finding new ones. Polanco Encarnacion’s contributions to this area of research include finding a new way of defining these sequences through an algorithm called the Minimum Excluded with Skipping Algorithm (MES). This algorithm is a generalization of the well-known Minimum Excluded Algorithm (MEX). While the MEX has been used to generate only a few Sturmian Sequences, they show how to generate through the MES all inhomogeneous Sturmian sequences. Moreover, this algorithm completely characterizes these types of sequences. In that sense, the MES is potentially more easily related to areas of application of Sturmian Sequences.

Another part of Polanco Encarnación’s research falls under Analytic Number Theory,specifically in the area of Uniform Distribution Theory. In this area Polanco Encarnación has collaborated with Dr. Zaharescu and Dr.Schultz to find the limiting distribution obtained when averaging over consecutive gaps generated by an irrational number and integrating over a small interval. This is significant because of its connections with the widely known three gaps theorem and in general with uniform distribution theory and its many applications. These include Physics, such as quantum ergodicity, Computer Science,Probability Theory, such as low discrepancy sampling, and other areas of applied mathematics. The concepts and techniques used in our research are also central to several areas of pure mathematics connected to uniform distribution theory, including Number Theory. As such, our work is of interest to scientists in the areas of Physics,Probability, Computer Science, Number Theory, and other areas of pure and applied mathematics. Polanco Encarnación has also worked with Beatty sequences, in particular, finding a new way of expressing logarithms in terms of a Series involving ratios of terms of a Beatty sequences. This is of interest for pure mathematics. Polanco Encarnación is currently involved in several projects in order to guide students on how to do research in math. They are related to the topics expressed above, to Continued Fractions, a foundational area of number theory and mathematics and in general, and other projects.

“Hispanic Heritage Month is an opportunity to show that Mathematics is a discipline sought after in Latin American/Hispanic countries. It shows not only our accomplishments, but also the great potential that may be dormant in our home countries. It is a call for all of us to take  actions to reach to all those with less opportunity and help them develop their full potential.”