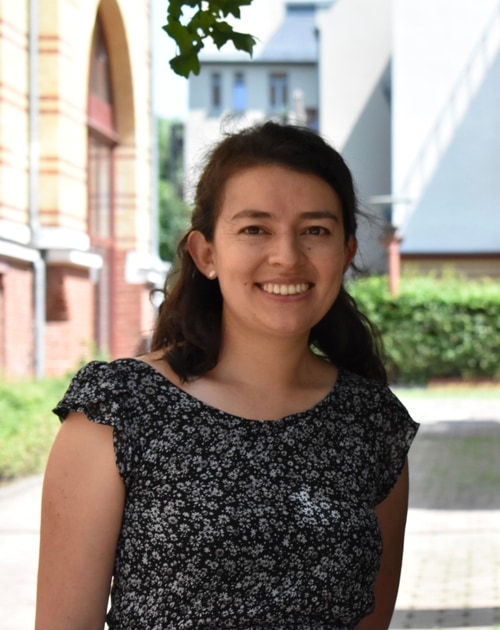 Eliana Duarte was born in Bogota, Colombia. She obtained her B.S. in Mathematics from Universidad de los Andes in Bogota. Afterwards she did a MA in Binghamton University and then moved to University of Illinois Urbana-Champaign(UIUC) where she finished her Ph.D. in Mathematics. During her time at University of Illinois,  Duarte served terms as president of the Colombian Graduate Student Association (CGSA) and the Chapter of the Association for Women in Mathematics at UIUC. Her main motivation to join the CSGA was to provide a welcoming environment for incoming graduate students from Colombia. Her efforts towards this goal not only were fruitful but also they created friendships and strong relations with other Hispanic graduate students at UIUC. As an active member of the AWM chapter, Duarte helped organize outreach events such as the Sonia Kovaleski math day for girls. After finishing her studies at UIUC in 2017, Duarte joined the Nonlinear algebra group at Max Planck Institute for Mathematics in the Sciences in Leipzig, Germany. Recently, she started a three-year postdoctoral position in the research training group Mathematical Complexity Reduction at Otto Von Guericke Universität Magdeburg.
‍
Duarte ’s research interests are in computational commutative algebra. The problems she studies in this area are usually motivated by applications such as Computer Graphics, Algebraic Statistics and Rigidity of structures. It turns out that algebraic methods can give valuable insight to problems in these areas such as understanding their complexity and providing efficient algorithms to perform difficult computations. For her Ph.D. thesis, Duarte studied the implicitization problem for surfaces in space using syzygies. Theimplicitization problem is of interest in Computer Graphics because it provides a straightforward method to handle geometric operations using a graphics software. After joining the Nonlinear algebra group at MPI, she started learning about Algebraic Statistics and, in particular, graphical models. In this direction, her current projects involve the study of the defining equations of varieties arising from colored probability trees.

"Being part of the Hispanic community makes me feel that there is a group of people that want you to succeed and are rooting for you. This is very valuable as a way of keeping myself motivated. I have specially enjoyed the stories of those who have been featured in Lathisms as I have found great role models. Knowing that each person has a unique story makes me aware of the difficulties and rewards that I will encounter as I move forward in my career."