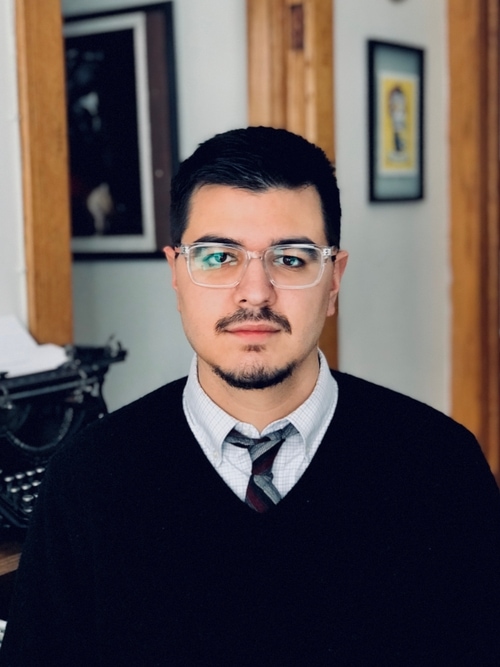 Christopher Perez grew up on the South Side of Chicago and attended Whitney Young Magnet High School, where he first became interested in studying math. In 2009, he started his freshman year at the California Institute of Technology.Perez graduated in 2013 with a B.S. in Pure Mathematics. While at Caltech he was the President of the Math club for three years and received the Mellon-Mays Undergraduate Fellowship, which is awarded by the Andrew W. Mellon Foundation with the stated goal of increasing diversity within university faculties.In 2013, he entered the Ph.D. program in Pure Mathematics at the University of Illinois at Chicago, where he is currently a doctoral candidate studying geometric group theory with his adviser, Daniel Groves. In 2015, he married his partner,Stephanie Reyes, with whom he attended high school and college, and who is currently also a graduate student in Pure Mathematics at UIC.

The elementary theory of a group G is the set Th(G) of all logical sentences in G using existential and universal quantifiers, i.e. the first-order theory of G. In 2006, Zlil Sela –and independently Olga Kharlampovich and Alexei Myasnikov – proved that any two finitely generated,non-abelian free groups have the same elementary theory, solving a problem first posed by Alfred Tarski in 1945. The geometric approach used by Sela to solve Tarski's problem enabled him to apply the same techniques to studying the elementary theory of torsion-free hyperbolic groups. He showed in 2009 that, given a fixed torsion-free hyperbolic group H, if G is a finitely generated group such that Th(G) = Th(H), then G is a torsion-free hyperbolic group – not necessarily isomorphic to H. The implication of such a result is that elementary theories are capable of detecting the geometry of groups.
‍
In the past several years, geometric group theorists have been working to generalize the methods of Sela's program and apply them to other problems. Perez’s research is currently focused on replicating parts of Sela’s program for toral relatively hyperbolic groups, which share many structural properties with hyperbolic groups and arise as the fundamental groups of hyperbolic manifolds with torus cusp cross-sections. His adviser, Daniel Groves, developed tools for working with these groups analogous to those developed by Sela. Using these together with work due to Chloé Perin and others which simplifies some of Sela’s technical machinery, he hopes to determine under what conditions toral relative hyperbolicity can be detected with elementary theories. Additionally, he hopes to find the conditions under which such groups have the co-Hopf property that injective endomorphisms are necessarily automorphisms.

“Reflecting on Hispanic Heritage Month, I’m confronted with the issue that,like many mixed-race people in the United States, I've had a difficult relationship with my heritage for much of my life. I took some Spanish in high school, but having grown up living in a predominantly white neighborhood and not speaking Spanish at home often made me feel that I didn’t belong within the Mexican-American community. More recently, I’ve come to understand that this is not uncommon among younger Latinx people in the United States, and I can embrace my Mexican heritage in my own way. I’m proud to celebrate Hispanic Heritage Month and deeply honored to be featured by Lathisms.” -Christopher Perez