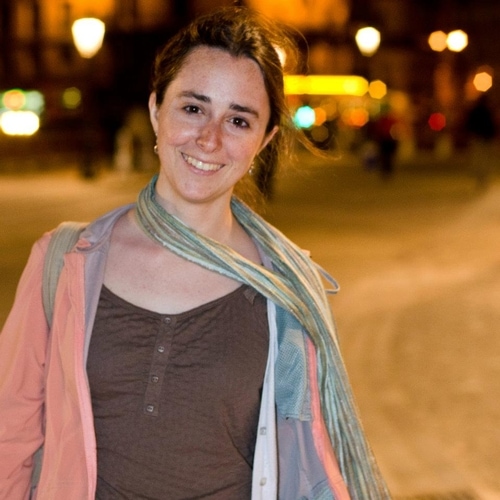 María Angélica Cueto was born and raised in Buenos Aires, Argentina. After finishing her undergraduate/Master's studies at the Universidad of Buenos Aires, supervised by Alicia Dickenstein, she moved to the US to pursue her doctoral degree at the University of California Berkeley, advised by Bernd Sturmfels. Her first postdoctoral position was held at the Institut Mittag-Leffler (Sweden) during the Spring 2011 semester long program on "Algebraic Geometry with a view towards applications." She was both a recipient of the NSF Postdoctoral Fellowship at Columbia University, mentored by Andrei Okounkov, and an Alexander von Humboldt Postdoctoral Research Fellow at Goethe-Universitaet Frankfurt (Germany). Her scientific sponsor was Annette Werner. She is currently starting her third year as Assistant Professor at The Ohio State University.

Ever since graduating, she has been actively involved in organizing various mathematical activities, including international workshops and conference series in Austria, Canada, Germany, South Korea, Spain, and the US. She was honored to be the "Early Career Researcher" plenary speaker at the 8th Australia-New Zealand Mathematics Convention (Melbourne, Australia). She was one of the mentors of the graduate student BOOTCAMP for the 2015 AMS Algebraic Geometry Summer Research Institute, in Salt Lake City. Whenever she is not travelling or working in her office, you can find her at a climbing wall, training for a marathon, tango dancing (as a true Argentinean) or enjoying the ski slopes.

Her research lies at the crossroads of several exciting areas of mathematics, such as polyhedral combinatorics, algebraic and analytic geometry, singularity theory and phylogenetics, to name a few. She specializes in tropical geometry, a framework for solving geometric problems using concrete combinatorial tools. Many interesting invariants associated to the relevant spaces (algebraic curves, Grassmannians, del Pezzo surfaces, etc.) get translated into absolutely down-to-earth counting problems which become tractable given our growing computational strengths. However this 'translation' is heavily coordinate dependent. Her current projects involve the development of effective techniques to determine and construct coordinate systems that best reflect the geometry of the original algebraic varieties. Computational challenges in these directions are the driving force of her work.

"I have been blessed with a career that has taken me to live in many interesting places and enabled me to meet wonderful people who have become very close friends and long term collaborators. Some of them I met at summer schools while a graduate student: it was natural to approach the other Latin@s in the meeting and introduce myself. Having similar backgrounds and learning that we had to face the same challenges humanized my mathematical journey. Organizations such as SACNAS and this "Hispanic Heritage Calendar" initiative provide great opportunities to inspire and support the next generation of Latin@s in STEM."