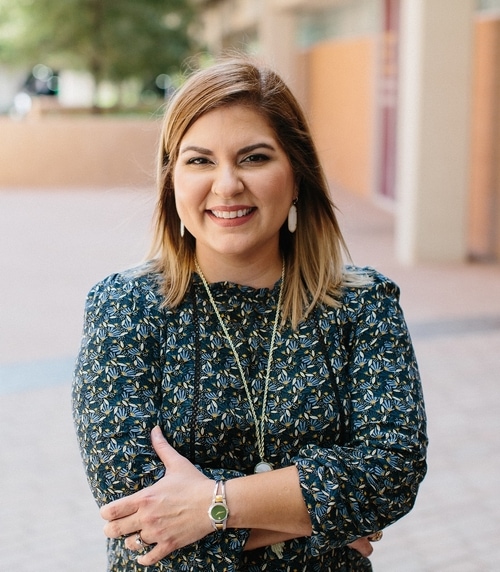 Karen R. Ríos-Soto grew up and was academically raised in the public school system in Puerto Rico. She received a B.S. in Mathematics from the University of Puerto Rico Mayaguez (UPRM) in 2002 and a Ph.D. in Biometry and Mathematical Biology from Cornell University in 2008. Along her academic journey, she had wonderful mentors such as her high school teacher Merisbel Román, undergraduate mentor Ivelisse Rubio and Ph.D. adviser, Carlos Castillo-Chavez. She spent nine months as a graduate research assistant in Los Alamos National Laboratory and three years at Arizona State University (ASU) before joining the Department of Mathematical Sciences at UPRM. Ríos-Soto is currently Associate Professor of Applied Mathematics and Bioengineering at UPRM and since 2010 an adjunct professor at the Mathematical, Computational and Modeling Science Center (MCMSC) at ASU.

Ríos-Soto has ample experience in the development of students through educational, research, and mentorship activities from the undergraduate to the doctoral level. She has supervised undergraduate research for more than 40 students as well as masters (10) and Ph.D. students (2) at UPRM and in the U.S.A. She has been involved with the REU-Mathematical and Theoretical Biology Institute (MTBI) at ASU as a Distinguished Scholar for more than 18 years. MTBI was founded in 1996 by Castillo-Chavez at Cornell University, a 2011 President Obama Honored Outstanding Science, Math and Engineering Mentors program. For three consecutive summers (2010-2012) she was the MTBI summer director, supervising undergraduate and graduate research in mathematical biology, and as of summer 2017, she is still research faculty of that program. She was also the recipient of a Center for Undergraduate Research in Mathematics mini-grant for the academic year 2015-2016 to perform undergraduate research at UPRM. Ríos-Soto has been a SACNAS member since 1999 (as an undergraduate student), co-organizer of Scientific Symposia, as speaker and mentor, including a development session on retention of professionals in STEM. With her charisma and devotion, she encourages students to participate and present their research work in conferences and symposia around the nation, with some of the students winning research presentation awards.

Ríos-Soto’s research interests reside on the study and modeling of biological systems in population dynamics, such as modeling the dynamics of infectious diseases, invasive species and social dynamics, among others. In particular, her research is driven by the study of the mechanisms underlying the spread of infectious diseases, their control and prevention. She has co-authored various peer reviewed publications in modeling the dynamics of infectious diseases. In the past, she has studied the role of peer pressure dynamics on various social processes such as smoking, ecstasy use, and obesity. Other research projects, involving her graduate students at UPRM, are on models to prevent and control mosquito borne diseases. With her students, she has researched: parameter estimation of epidemiological parameters from dengue fever data, the impact of climate on the spatial spread of dengue, and mechanisms of control on Zika virus epidemics as well as yellow fever vaccine distribution in African countries. Her most recent interests are on studying the impact of particulate matter such as PM10 (produced by natural and unnatural sources) in pulmonary diseases.

“I celebrate our diversity all year round and promote the inclusion of more Latinos/as in our field. During Hispanic Heritage Month, I’m honored and humbled to represent Hispanics, Latinos/as, and women in mathematics, and from my position encourage other young Hispanic minds to achieve a higher level of education in mathematics and join our wonderful community... my motivation now is to pay it forward, y con mucha pasión.”