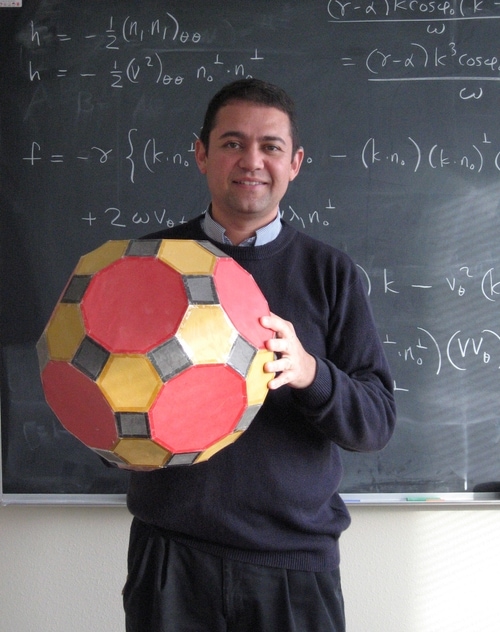 Jesús De Loera is an expert in the field of Discrete Mathematics, but his research encompasses a diverse set of topics including his work in (pure) convex geometry, algebraic combinatorics, and combinatorial commutative algebra, as well as his (applied) work in combinatorial optimization and algorithms. In addition to more than 80 published research papers, he has co-written two graduate level textbooks: Triangulations: Structures for Algorithms and Applications (Springer, with J. Rambau and F. Santos) and Algebraic and Geometric Ideas in the Theory of Discrete Optimization (SIAM, with R. Hemmecke and M. Koeppe). The first is a treatise about combinatorics of triangulations of polytopes and the second an introduction to the state of the art in algebraic-geometric algorithms in optimization. In general, he enjoys rethinking mathematics in terms of algorithmic questions and understanding how computers can be "taught" to discover or prove theorems (e.g., automatically produce rational generating functions from geometric counting questions). He approaches difficult computational problems using tools from algebra, combinatorics, and convex geometry, and topology. He believes in the exciting future of interdisciplinary work. Some of his favorite mathematical objects are polytopes, which are multidimensional generalizations of polygons and cubes (some pretty ones seen in the pictures above).

De Loera was awarded an Alexander von Humboldt Fellowship in 2004, the 2010 INFORMS computer society prize, a 2013 John von Neumann professorship at the Technical University of Munich, and he was elected as a fellow of the American Mathematical Society in 2014. De Loera has been plenary or semi-plenary speaker at many major scientific conferences including a SIAM annual meeting, MAA Mathfest, AMS regional meetings, COMBINATEXAS, and CANADAM. He has presented more than 40 invited scientific colloquia in well-known academic institutions such as MIT, Caltech, Oxford University., UC Berkeley, UCLA, Cambridge Univ., MAA Carriage House, Claremont-McKenna College, IBM, and Courant Institute NYU. He has also given more than 50 seminars at academic departments around the world. He has received national and international grants to support his work, including from NSF, NSA, and IBM.

He is an associate editor of the journals SIAM Journal of Discrete Mathematics, SIAM journal of Applied Algebra and Geometry, Boletin de la Sociedad Matematica Mexicana and a former editor of Discrete Optimization. He has also served the mathematics community as a member of many committees and organizer of many events, with an emphasis in promoting mathematics for underserved communities. Recently, he served on the AMS committee of Education, as well as Vice-Chair of the UC Davis Mathematics Department and Faculty Assistant to the Dean of Mathematical and Physical Sciences in undergraduate matters. He was elected to the AMS executive council in 2015 and has co-organized over 30 workshops and events, from many small regional meetings (e.g. AMS meetings) to two large semester-long MSRI programs "Discrete and Computational Geometry" (2003) and "Geometric and Topological Combinatorics" (2017).

For his dedication to outstanding mentoring and teaching, he received the 2003 UC Davis Chancellor's fellow award, the 2006 UC Davis award for diversity, the 2007 Award for excellence in Service to Graduate students by the UC Davis graduate student association and the 2013 Chancellor's award for mentoring undergraduate research and, in 2017, the Mathematical Association of America Golden Section Award. He has successfully supervised eleven Ph.D. students, eight postdoctoral scholars, and over 50 undergraduate research projects. He is very proud of all the successful students who have shared mathematics with him over the years.

“I think we need to support our community indeed. Other communities (e.g., Asian mathematicians) are better connected and network more than us. I try to do my part; I am the mentor of the local club of Chican@s and Latin@s in Engineering and Science.”