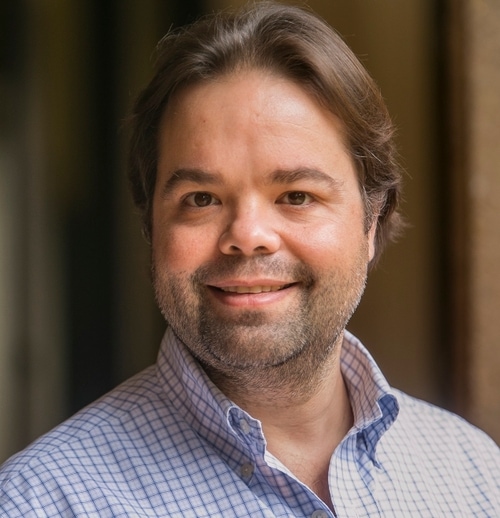 For the past 15 years, Carlos Bustamante has led a multidisciplinary team working on problems at the interface of computational and biological sciences. Much of his research has focused on genomics technology and its application in medicine, agriculture, and evolutionary biology. His first academic appointment was at Cornell University’s College of Agriculture and Life Sciences. There, much of his work focused on population genetics and agricultural genomics motivated by a desire to improve the foods we eat and the lives of the animals upon which we depend. He moved to Stanford in 2010, to focus on enabling clinical and medical genomics on a global scale. He has been particularly focused on reducing health disparities in genomics by: (1) calling attention to the problem raised by >95% of participants in large-scale studies being of European descent; and (2) broadening representation of understudied groups, particularly U.S. minority populations and those from Latin America. Taken together, this work has empowered decision-makers to utilize genomics and data science in the service of improving human health and wellbeing. As Inaugural Chair of Stanford’s new Department of Biomedical Data Science, his future goal is to scale these operations from focusing on researchers to consumers and patients, where we ultimately want our work to have the greatest impact.

In 2017, Bustamante was appointed a Chan-Zuckerberg Investigator and, from 2011-2016, he was a MacArthur Fellow. He also received a Stanford Prize in Population Genetics and Society in 2016, a Sloan Research-Fellowship in Molecular Biology from 2007-2009, and a Marshall-Sherfield Fellowship from 2001-2002. Bustamante also has a strong interest in building new academic units, non-profits, and companies. He is Founding Director (with Marcus Feldman) of the Stanford Center for Computational, Evolutionary, and Human Genomics (CEHG), and former Founding Associate Director of the Cornell Center for Comparative and Population Genomics (3CPG). He serves as an advisor to the US federal government, private companies, startups, and non-profits in the areas of computational genomics, population and medical genetics, and veterinary and plant genomics. He is currently Director of Eden Roc Biotech, founder of Arc-Bio (formerly IdentifyGenomics and BigData Bio), and an SAB member of multiple companies, including Embark Veterinary, the Mars/IBM Food Safety Board, and Digital Ventures. Finally, he is the Owner and President of CDB Consulting, LTD., an expert witness, IP, and strategy consulting group.

"I was born in Caracas, Venezuela, and grew up in Miami, Florida. This has had a tremendous impact on how I view the world, and what I have ended up doing as a career. My dad and grandfather were both physicians, and I started out wanting to be a physician. As I began to get involved in biomedical research on my path to becoming a physician, I realized I was really more drawn to the research question, and how we begin to apply this information to improve people’s lives, than to being a doctor myself. I became fascinated with how we might be able to use genetics to understand complex diseases and develop tailored approaches to both how we diagnose and treat disease, and, more specifically, how we prevent disease in the first place.

This work was very much inspired by what I saw growing up in Venezuela and in the US, and particularly in Miami: that we vary tremendously from person to person, and that the notion that the cause of diabetes, for example, might be the same in me and in you is a bit of a crazy assumption. How do we know it’s the same cause? How do we begin to tackle and understand the individual contributors that may be our genetics, our personal history, or our environment in these very complicated and important health problems that we face as a country and as an individual community?

So, my goal has been to build really diverse research teams that bring together mathematicians, doctors, anthropologists, geneticists—whoever is interested in the problem—to come together in a multi-disciplinary framework and take these challenges on. It has been extraordinarily rewarding, whether I was doing this as a graduate student or a young Assistant Professor in the colds of Ithaca, New York, or, now, as a senior faculty member at Stanford. Truly, all of the success has come from having been able to build and sustain research communities that are driven and motivated by tackling really important scientific problems.”