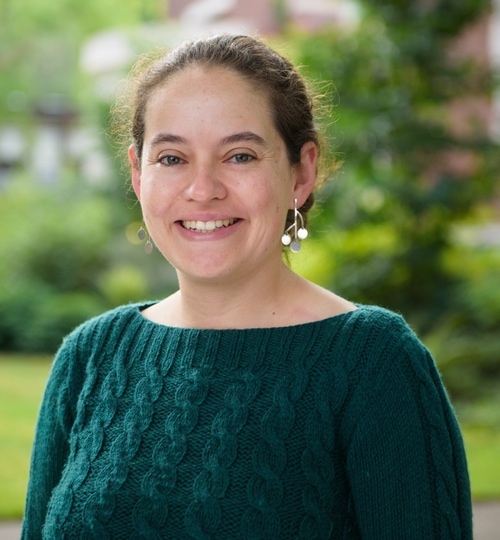 Angélica Osorno was born in Bogotá, Colombia. She received her B.S. in 2005 and her Ph.D. in 2010, both from MIT. After spending three years at the University of Chicago as an L.E. Dickson Instructor, she joined the faculty of the Department of Mathematics at Reed College, where she is now an Assistant Professor. Her awards include an MSRI Postdoctoral Fellowship, an NSF Research Grant, a Simons Collaboration Grant, and a Woodrow Wilson Career Enhancement Fellowship for Junior Faculty. She has been a project leader and mentor for the two iterations of the Women in Topology Workshop (one of the AWM-sponsored Research Networks), and is currently organizing the third edition. At Reed, she is a mentor for STEMGeMS (the student group who gathers gender minorities in the STEM fields) and founded a networking event for underrepresented students in STEM.

Angélica Osorno works in the intersection of algebraic topology and category theory. Her most important research work is her long-term project to prove the two-dimensional stable homotopy hypothesis. Roughly speaking, this is a special case of a long-standing conjecture of Grothendieck that the combinatorial data of category theory is equivalent to the geometric data of topological spaces.  The particular case of the conjecture studied by Osorno and her coauthors, Nick Gurski and Niles Johnson, concerns topological spaces that have an underlying addition and only have "holes" in dimensions zero, one, and two. She is currently working with Bert Guillou, Peter May and Mona Merling on extending these ideas to the equivariant setting, that is, studying spaces with group actions.

"Last year I was very excited when Lathisms came out. Every day of the month I looked forward to reading about these amazing role models, some of whom I knew, but many whom I had never heard about. Thank you for this initiative to highlight the work of Latin@s and Hispanics in mathematics, and thank you for including me. It is truly an honor!"