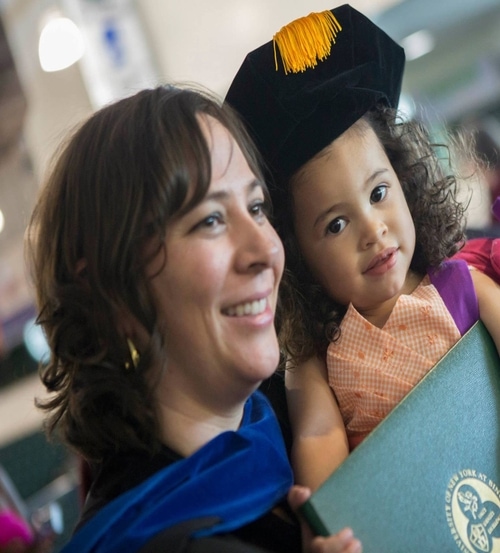 Amanda Ruiz was born in Long Beach and raised in Huntington Beach, CA. She left Southern California for the Bay Area to attend UC Berkeley, where she created her own major focused on Social Movements. After some experience working in secondary education, and a realization that mathematics is a social justice issue, Amanda went back to school to pursue a degree in mathematics. Throughout her educational and professional journey, community has always been important to her. She received a Master’s degree in Mathematics from San Francisco State University, where she started the student group Mathematistas, which created a network of female graduate students in mathematics.  She then received her PhD in mathematics from Binghamton University under the advisement of Laura Anderson. While at Binghamton University, she started the Graduate Women's Organization to help women support each other in the academic environment. After giving birth to her daughter, she also served as president of the Binghamton University Parent's Collective, an organization aimed at creating a community of graduate students who are juggling school and children. After a year as a teaching and research postdoctoral fellow in the Mathematics Department at Harvey Mudd College, Amanda joined the University of San Diego as an assistant professor of mathematics where she is a co-advisor of Students of Color in Science, Technology, Engineering, Math, and Medicine Creating community is a goal she continues to worked towards.

Ruiz believes that access to mathematics is a social justice issue that she has a responsibility to address as an educator. She does this through her commitment to making mathematics more accessible for women and students of color and considers service in this area an integral part of her job as an educator and academic. She strives to make the world a more just place by training elementary school teachers, who are great at teaching math, and who understand that students’ identities affect their educational experiences; teaching students how to use mathematics to create connections with other human beings and understand society; and, by creating an equitable classroom environment in which everyone is included, supported, and can learn in a way that challenges them and allows them to draw from their personal strengths and experiences.

Amanda Ruiz’s Ph.D. thesis (2013) was on Realization Spaces of Phased Matroids. Her prior research is predominantly in combinatorics and matroid theory.  Her research has more recently expanded to include pedagogical work where she is particularly interested in using math to study issues of social justice, and investigating pedagogies that make mathematical spaces more inclusive, where those traditionally underrepresented in mathematics can thrive.  Dr. Ruiz is a co-advisor of two undergraduate research groups at the University of San Diego for women and others students whose identities are underrepresented in mathematics.