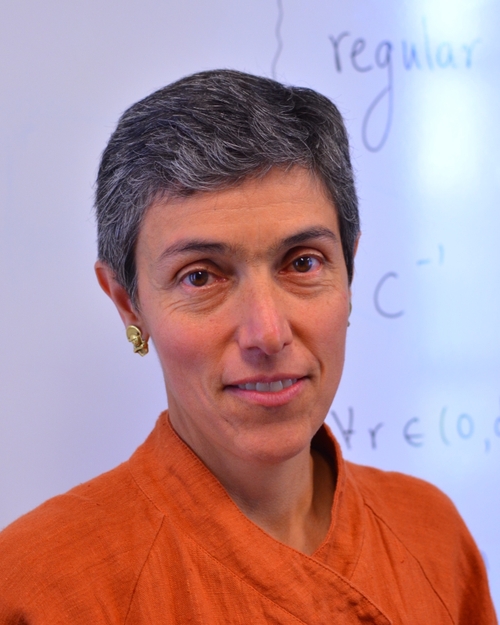 Tatiana Toro was born in Bogotá, Colombia. Both of her parents were the first in their family to attend college. She received her B.S. from the Universidad Nacional de Colombia in Bogotá and her Ph. D. from Stanford University. She has been a member of the Institute for Advanced Study in Princeton, MSRI in Berkeley and a fellow at the Radcliffe Institute for Advanced Study. Currently she is Craig McKibben & Sarah Merner Professor of Mathematics at the University of Washington in Seattle. Her awards include a Guggenheim Foundation Fellowship, a Simons Foundation Fellowship, an Alfred P. Sloan Research Fellowship and a National Science Foundation Mathematical Sciences Postdoctoral Research Fellowship. She was an invited speaker to ICM 2010 in Hyderabad, India. She delivered an invited address at the Joint Mathematics Meeting in New Orleans, Louisiana, in January 2011, and the NAM Clayton-Woodard Lecture at the Joint Mathematics Meeting in Seattle, Washington, in January 2016. Recently she has been involved in efforts to promote diversity in the mathematical sciences. In the Spring of 2015 she co-organized the first Latinos in the Mathematical Sciences conference (Lat@math) at the Institute for Pure and Applied Mathematics at UCLA. The second edition of this conference is being planned for 2018, see www.ipam.ucla.edu/lat2018.

Tatiana Toro is a mathematician working at the interface of geometric measure theory, harmonic analysis and partial differential equations. The interaction between these three areas has been one of the pillars of her research. Her work focuses on understanding mathematical questions that arise in an environment where the known data is very rough. In particular she studies the properties of interfaces arising in “noisy" minimization problems. The main premise of her work is that under the right lens, objects, which at first glance might appear to be very irregular, do exhibit quantifiable regular characteristics. With C. Kenig she introduced the notion of chord arc domains, setting a new framework to study boundary regularity questions for second order partial differential operators. They laid the foundation of what has become a new, rapidly developing area within PDEs. Her work with C. Kenig and D. Preiss brought tools from geometric measure theory to study basic questions about the structure of harmonic measure.

Their ideas have provided a new and original approach to understanding the relationship between the geometry of a domain and the regularity at the boundary of the solutions to second order partial differential equations. Currently she is very excited about a program she has been developing with G. David and M. Engelstein concerning the properties of almost minimizers. The goal is to show that even in the presence of “noise" variation characteristics preserve regularity up to first order.