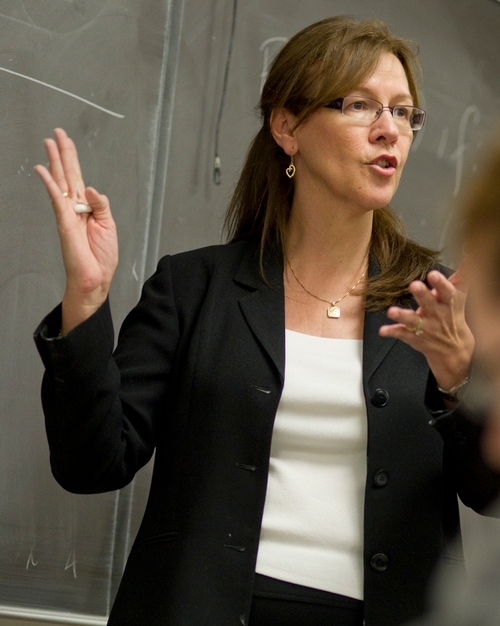 Minerva Cordero received degrees in mathematics from the University of Puerto Rico (B.S.), the University of California at Berkeley (M.S.) and The University of Iowa (PhD). She is a Professor of Mathematics and Associate Dean for Academic Affairs in the College of Science at The University of Texas at Arlington and a renowned researcher, whose work has been supported by the National Science Foundation and the National Security agency
among others.
‍
A dedicated teacher, she has received several awards for her outstanding work including the prestigious President's Excellence in Teaching Award at Texas Tech University and the Regents’ Outstanding Teaching Award from the University of Texas System. In 2007 she received the Texas Section Award for Distinguished College or University Teaching of Mathematics. She is involved in outreach activities to increase the number of underrepresented minorities in mathematics and science. She served as Governor-at-Large for Minority Interests for the Mathematical Association of America (MAA), was Chair of the MAA Committee for Minority Participation in Mathematics, and served as Chair of the Human Resource Advisory Committee of the Mathematical Sciences Research Institute (MSRI) at UC Berkeley. Currently she is a member of the Advisory Council of the Pipelines into Biostatistics Program at Harvard University. She is a sought-after speaker for her inspirational presentations filled with her passion for mathematics and science and for empowering women and minorities to pursue careers in those fields. In 2016 she was recognized as a Ford Legendary Woman (Mujer Legendaria de Ford).

Cordero’s research interests lie at the intersection of algebra, geometry, and combinatorics in the area of finite geometries. More specifically, Cordero’s research Is concerned with the finite projective (or affine) planes coordinatized by a non-associative algebraic structure called a semifield. She classified all the semifield planes of order p^4 with certain collineations, and discovered some new planes. She then generalized this theory to planes of odd order and this led to the study of finite affine planes of rank 3, that is, affine planes that admit a collineations group acting as a rank 3 permutation group on the affine points. Her results in this area completed the classification of finite translation planes of rank 3 and odd dimension over their kernel. Dr. Cordero has made many meaningful contributions on finite projective and affine planes, one of the most difficult and, simultaneously beautiful areas of Finite Geometry.