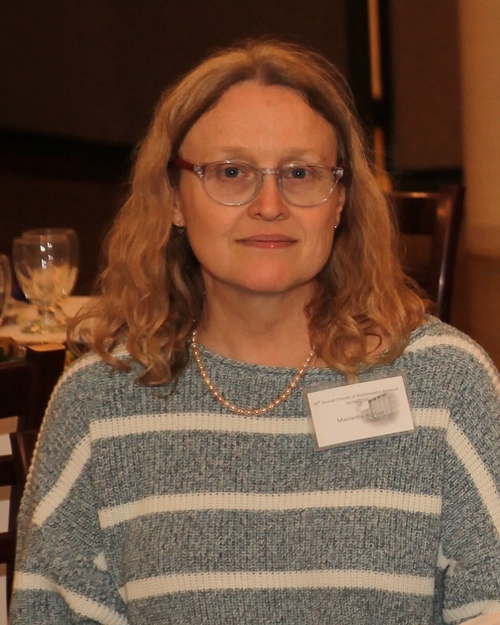 As a young child Marianne lived on a homestead sheep ranch in a remote part of Patagonia, in Argentina. She spent her school years in a beautiful small ski resort, Bariloche, which had a physics research center, and Fundacion Bariloche, which employed several mathematicians, among other scientists. She went to the mathematics program at the University of Buenos Aires, where she got a Master's degree (under Josefina Alvarez) and Ph.D. degree (under Julio Bouillet). After speding time in Italy, Spain, France, and Germany, she arrived to USA. She is now Professor of Mathematics at Kansas State University.She has directed the math REU program in math at Kansas State, and the Center for Integration of Postdoctoral, Graduate, and Undergraduate Research (I-Center) for many years. The I-Center is the second oldest of these kind of centers. These centers now form a group - GLU, Geometry Labs United. GLU has turned into a wonderful network in which to raise young mathematicians. She is also a mentor for Math Alliance, a group for which she has the highest respect. She prides herself in the number of students she has directed to become Math Alliance Scholars. Running an REU and working at a school in a rural area in a state whose western part has several majority Hispanic cities, she encounters large numbers of diverse and underprivileged mathematically talented students.

Her most cherished award came from her university's Women in Engineering and Sciences Program - the "You make a difference at K-State” award. To get it, you needed to be nominated by a student. The student who nominated her now holds a Ph.D. in math from the University of Washington, and works in San Diego at a non-profit dedicated to cyber-security.Most of her research is in the area of minimal smoothness for degenerate parabolic equations with free boundaries. She worked extensively on the Stefan problem with a mushy region (a range of values of the solution where there is insufficient energy to start phase change). She was able to show that locally integrable energies have temperatures that are locally twice integrable, along with their gradients and first derivatives in time. With energy estimates and compactness thus provided, she could characterize the optimal growth of solutions at infinity (via a Harnack-type inequality), and prove the existence of initial traces with this growth (with Daniele Andreucci), and the existence and uniqueness of a distributional solution for the initial value problem for measure data with this growth. The free boundaries carry a measure which can be expressed in terms of the equation and is countable rectifiable. On the reduced free boundary, the classical Rankine-Hugoniot condition is satisfied in a density sense (with Donatella Danielli). Then, she characterized the Hele-Shaw problem as a singular limit of Stefan problems with a mushy zone with increasing diffusivities (with Ivan Blank and Charles Moore). Understanding the Hele-Shaw problem and its relation to the Stefan problem had been a long standing question. Regarding the uniqueness of solutions to degenerate parabolic equations with signed measures as data, she obtained, together with Charles Moore, the only result existing to date for the two-phase Stefan problem with mushy region. This problem had been open for more than thirty years. The result indicates that uniqueness with signed measure data should hold for most of these equations. Her current interest is in solutions under minimal assumptions to the total variation flow.

"Many of my mentors and mathematicians I had the privilege to meet are not with us anymore. What they offered me, and what we have the privilege and honor duty to pass on, is to keep our profession welcoming, as I knew it as a student in Argentina. A place where people from all walks of life, genders, religions, political views, and ethnicities could enjoy and celebrate learning and doing mathematics together. Students do better in a cooperative rather than competitive climate. My work with REUs and the I-Center shows me how well it serves students to do research early in their studies, as well as having early career mathematicians to mentor them.  In writing this, I see my life as a mathematician on the backdrop of a community and a network across countries and continents. " - Marianne Korten