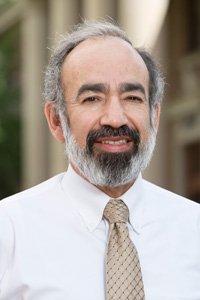 Seneca C. and Mary B. Weeks endowed chair of statistics and Chair of the Department of Mathematics and Statistics
University of Nevada at Reno.
Podcast PosterWebsite

Growing up in México, Javier Rojo's goal was to become a major league player – playing for the NY Yankees. His parents had a lot of influence on his early development, pushing him to be the best he could be. Not having had an opportunity to go beyond a few years of elementary education, his parents understood that education was the way to a better life. Javier played college baseball as an undergraduate at UTEP, and played in semi-pro leagues in México. He was selected to play in the 1968 Pan-American games, but playing in a state tournament he broke his ankle and the dream of becoming a professional baseball player suddenly disappeared. As a consequence, he had to concentrate on pursuing a graduate degree. As a graduate student in Berkeley, he had tremendous support from his wife and children who constantly encouraged him and never allowed him to give up. Javier had excellent support in Berkeley working with Erich Lehmann and Julie Shaffer. He is currently the Seneca C. and Mary B. Weeks endowed chair of statistics and Chair of the Department of Mathematics and Statistics at the University of Nevada at Reno.

The REU program (RUSIS@UNR) has also been a source of great professional satisfaction for Javier. More than two hundred students have gone through the program. A substantial percentage of these students have pursued graduate degrees in the mathematical and statistical sciences. As two examples of the many successes that RUSIS students have enjoyed, consider Jonathan Skowera and Juan Sagredo. Jonathan received his PhD degree in mathematics from Institut für Mathematik, Universität Zürich and is currently a member of the Physics group at the ETH Zürich. Juan recently received his PhD from Princeton in economics and is starting a Postdoc at the ETH Zürich. The American Mathematical Society, in 2014, recognized RUSIS with the award “Programs that make a difference” in recognition of the impact of the program in mentoring of students and encouraging them to pursue graduate studies. About 61% of the participants are members of underrepresented and nontraditional groups in the mathematical and statistical sciences.

Javier is an elected Fellow of the following societies: American Statistical Association, The Institute of Mathematical Statistics, The American Association for the Advancement of Science, and is an elected member of the International Statistical Institute. He also received the 2010 Don Owen award from the American Statistical Association. He has served (1998-1999) as program director in the statistics and probability programs in NSF and has participated as a member and as chair of two subcommittees in the 2013 NSF-DMS Committee of Visitors. He will again be serving in the NSF-DMS Committee of Visitors in 2016.

Javier's initial research interests were in statistical decision theory under Erich Lehmann’s mentorship. Over time, and influenced by Erich’s work, he became interested in partial orderings of distributions and nonparametric estimation of survival functions under such constraints. Some of his work also addresses the classification and concept of tail-heaviness and the corresponding nonparametric inference problems (estimation of tail indices and nonparametric methodology for testing for heavy tails). In the last few years, working with graduate students, he has become interested in dimension reduction methods in the context of survival analysis and complex systems. He currently collaborates with civil engineers in modeling the reliability of the power grid and other complex urban infrastructures. He continues to explore the theory and applications of random matrices to aspects of dimension reduction and this work will continue for the next few years.

"The number of Ph.D. degrees earned by Hispanics continues to grow and the diversity of areas within the mathematical and statistical sciences where Hispanics are making headway is also on the increase. In parallel with this growth, the need to have better and more easily available mentorship has increased. The need for institutionalizing mentoring programs for Hispanics and other underrepresented students has never been more critical. SACNAS, for many years, and the Math Alliance in the last few years, has been doing an excellent job in providing a forum for Hispanic and other students to develop their professional skills. It is hoped, however, that more mathematics and statistics departments join these and other associations in providing an environment where Hispanic, and more generally underrepresented, students can receive mentorship and encouragement in pursuing graduate degrees in the mathematical and statistical sciences." - Javier Rojo