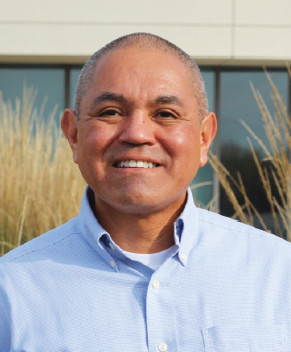 Herbert A. Medina was born in El Salvador and emigrated to Los Angeles, California, with his parents at age eight. He joined the faculty at Loyola Marymount University (LMU) in Los Angeles in 1992 after receiving his Ph.D. in Mathematics from UC Berkeley and his B.S. in Mathematics/Computer Science from UCLA. Herbert teaches courses at all undergraduate levels and has published mathematical research in functional analysis, wavelets and polynomial approximations (collaboratively with undergraduates). One of his passions is working to increase participation of historically underrepresented groups in STEM. For example, he is one of five founding co-directors of the Mathematical Sciences Research Institute Undergraduate Program (MSRI-UP) in Berkeley, CA, and from 1998-2002 he co-directed the Summer Institute in Mathematics for Undergraduates (SIMU) in Puerto Rico---a program that earned national acclaim for its design and success. In 2014, Herbert was honored with the SACNAS Distinguished Undergraduate Institution Mentor Award. He has held various leadership/administrative positions at LMU and in other organizations. He currently serves as Associate Dean in the Seaver College of Science and Engineering. Even though he enjoys his work as a researcher and administrator, his true passion is that of a teacher/mentor. His greatest joy is watching his students succeed!

Herbert is a mathematical analyst. In the earlier part of his career, he focused on questions in functional analysis, making contributions to the understanding of Hilbert space operators that arise from irrational rotations; these questions have interest to mathematicians studying ergodic theory, harmonic analysis and the representation of certain groups as families of operators. He also did some work on theoretical questions that arise in the study of wavelets. In particular, he and two of his collaborators established a constructive procedure that produces all wavelet sets in ℝn relative to an integral expansive matrix. The last few years, his focus has turned to classical analysis and number theory. In particular, through the innovative use of some simple integrals, he has developed methods to approximate the classical arctangent function. These methods led him and his undergraduate collaborators to discover some easily-describable, rapidly-converging series to π, thus making a contribution to one of the oldest approximation problems. He hopes to continue to work on problems of approximation and one of his “pi in the sky” dreams is to produce a method for computing π that is faster and more efficient than the methods discovered thus far.