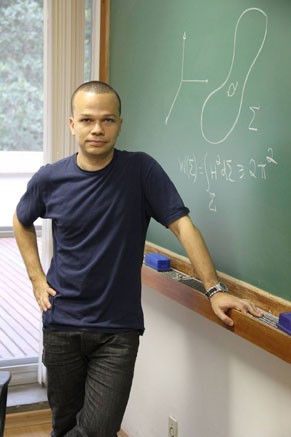 Fernando Coda Marques was born in 1979 and grew up in Maceió, state of Alagoas, Brazil. He received a B. S. from Federal University of Alagoas (UFAL) and an M. S. from IMPA in 1999. He received the Ph.D. at Cornell University in 2003 under the supervision of the Colombian mathematician José Fernando Escobar. He became a Professor in Princeton University in 2014, after being at IMPA (Rio de Janeiro) since 2003. He has visited Stanford University during several periods since 2005, was a member of the IAS in Princeton (2008) and a visiting professor at several institutions in France: École Normale Superieure, École Polytechnique, Institut Henri Poincaré, Institut Fourier and Marne-la-Vallée. In 2012 he received the Ramanujan Prize (ICTP, Abel Fund and IMU), the TWAS Prize in Mathematics and the UMALCA prize (Union Matematica de America Latina y el Caribe). He was awarded the 2016 AMS Oswald Veblen Prize in Geometry. Coda Marques gave an invited address in the International Congress of Mathematicians (ICM) of Hyderabad, 2010, and a plenary lecture in the ICM of Seoul, 2014. He also delivered the Barrett Memorial Lectures (Tennessee), the Yamabe Lectures (Northwestern), the Hadamard Lectures (IHP-Paris), the S. Lojasiewicz Lecture (Krakow), the Joseph Fels Ritt Lectures (Columbia), the D'Atri Memorial Lectures (Rutgers), the Chern Lectures (Tsinghua University) and the Zygmund-Calderón Lectures (University of Chicago). He is a Member of the Brazilian Academy of Sciences since 2014. He currently lives with his wife, Ana, and his son, Pedro.
‍
His research interests lie in Differential Geometry, the study of geometric problems through the techniques of Calculus. He has done work on conformal geometry (the Yamabe Problem) and more generally on the geometry of the scalar curvature including problems connected to General Relativity. More recently he has become interested in the theory of minimal surfaces. Jointly with Andre Neves, he has used the min-max theory of minimal surfaces to solve the Willmore Conjecture of 1965. This concerned finding the optimal toroidal surface in three-space. They have also solved Yau's conjecture, about the existence of infinitely many minimal hypersurfaces, in the positive Ricci curvature setting, and more recently we have established a Weyl law predicted by Gromov. Major questions in these directions remain open and he hopes to contribute further to the field.

"I am honored to be part of this celebration. I intend to continue doing first-rate work with the hope of inspiring my Latin-American fellows." - Fernando Coda Marques