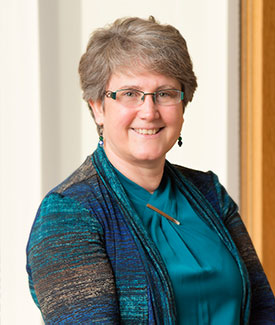 The daughter of missionaries, Carol Schumacher was born and raised in Bolivia where she was lucky enough to learn both English and Spanish when her brain was hard-wired to learn languages. As a green-eyed, blond kid, she often got mistaken for a foreigner by other Bolivians, so one of her favorite retorts as a child was "No soy gringa! Soy Paceña!" Schumacher received her BA from Hendrix College and her Ph.D. in mathematics from The University of Texas at Austin. She has been a member of the Kenyon College faculty since the fall of 1988. She has served three terms as chair of the department of mathematics and statistics and is the recipient of Kenyon's Trustee Teaching Award. She is currently serving as chair of the faculty. Schumacher is active in the Mathematical Association of America and recently co-chaired the committee that wrote the 2015 CUPM Curriculum Guide for Majors in the Mathematical Sciences. In recent years, she has been invited to address the Project NExT fellows at their summer workshop and has also given a number of invited addresses at MAA section meetings. As a member of a team, Schumacher has also been active in giving workshops that help faculty learn how to incorporate inquiry-based approaches into their classrooms. Schumacher is married to a physicist and has two grown daughters.

Carol Schumacher wrote a Ph.D. thesis in Banach spaces under the direction of Edward Odell. As a faculty member at an undergraduate institution, her interests have broadened to encompass real analysis, more generally. Her primary contributions to the literature have come in the form of two textbooks: Chapter Zero: Fundamental Notions of Abstract Mathematics, 2E and Closer and Closer: Introducing Real Analysis. These texts support an inquiry-based approach to a Transition to Proofs course and a first Real Analysis course. Over the years she has also worked on a number of research projects with undergraduates.

"As the adult version of the green-eyed, blond kid mentioned above, I appreciate the inclusiveness of the organizers that are helping us to celebrate the contributions of Hispanic mathematicians, and I am honored to have my work included." - Carol Schumacher