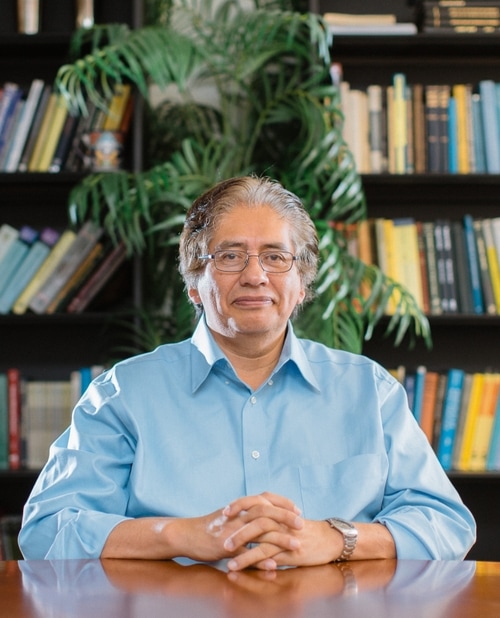 Carlos Castillo-Chavez, an immigrant to the USA in 1974, was born in Mexico City. He is now a Regents Professor, a Joaquin Bustoz Jr. Professor of Mathematical Biology and a Distinguished Sustainability Scientist at Arizona State University (ASU). His higher education owes a debt of gratitude to jobs and taxpayers support provided by the state of Wisconsin, in particular to Chancellor Lee Dreyfus’s’ help at a time of need. Castillo-Chavez received his bachelor’s, master’s and PhD degrees from the University of Wisconsin System; Stevens Point, Milwaukee and Madison, respectively. Recognitions include three White House Awards (1992,1997, and 2011), the 12th AMS Distinguished Public Service Award in 2010, the 2007 AAAS Mentor award, the 17th recipient of the SIAM Prize for Distinguished Service to the Profession and a Distinguished Alumni by UW Stevens Point. He is a fellow of the AAAS; SIAM; AMS; and ACE (American College of Epidemiology). He has held honorary Professorships at Xi’an Jiatong University in China, the Universidad de Belgrano in Argentina and East Tennessee State University. Past appointments include a Stanislaw M. Ulam Distinguished Scholar at Los Alamos National Laboratory, a Cátedra Patrimonial at UNAM in México, and a Martin Luther King Jr. Professorship at MIT. He was a member of the Board of Higher Education at the National Academy of Sciences (2009-2015) and served in President Barack Obama Committee on the National Medal of Science (2010-2015).

Castillo-Chavez has co-authored over 200 publications and a dozen books, textbooks, research monographs and edited volumes. His research lives at the interface of disease evolution, behavioral epidemiology, social dynamics, homeland security, epidemiology, addiction and sustainability. Working with undergraduate and graduate students, former participants of the Mathematical and Theoretical Biology Institute, he has been addressing questions of importance to the dynamics, evolution and control of dengue, Ebola, HIV, influenza, SARS, tuberculosis, and ZIKA. Over his 30 years in academia, he has mentored 24 postdoctoral students. His 41 PhD students include 20 women, 26 from US underrepresented groups and 6 from Latin America. He has been a research co-mentor to over 400 undergraduates. His next decade is committed to bringing connections between Latin American and USA mathematicians, particularly those from underrepresented groups.  This is being done with the help of a NSF IRES grant at UNIANDES in Colombia and the recently inaugurated Centro de Modelaje Matemático Carlos Castillo-Chavez, at the University Francisco Gavidia in the City of San Salvador, in the Republic of El Salvador. His appointment to NSF’s Advisory Committee for Education and Human Resources (2016-2019) and his election as a Member-at-Large of the Section on Mathematics of the AAAS will continue to provide him with a forum where he can continue to promote access and excellence within a model of inclusion.