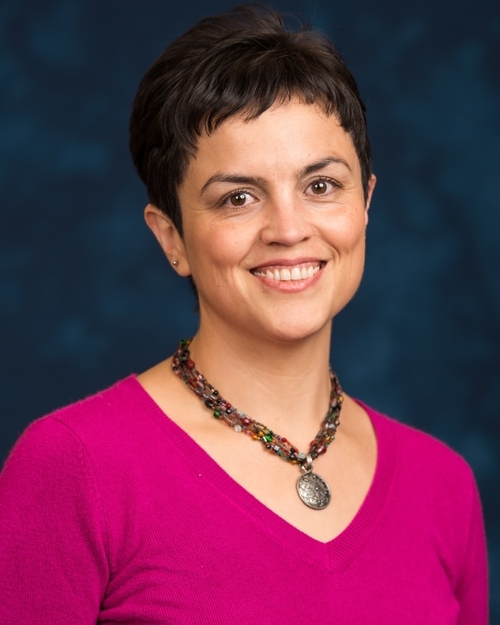 Brisa N. Sánchez is Associate Professor of Biostatistics. She received her Ph.D. in Biostatistics in 2006 from Harvard University. She joined the University of Michigan that year, and became an Assistant Professor in 2008. In 2012, she was named John G. Searle Assistant Professor at the University of Michigan in recognition of her research accomplishments, and was promoted to Associate Professor, with tenure in 2013. Born and raised along the US-Mexico border, she earned a bachelor’s degree in mathematics and a master’s degree in statistics from the University of Texas at El Paso. Three critical events in her career are: 1) attending the Mathematical and Theoretical Biology Institute, 2) participating in the 1999 conference of the Society for the Advancement of Chicanos and Native Americans in Science, and 3) being awarded a Howard Hughes Pre-doctoral Fellowship. The first two events helped her answer a burning question: how can mathematics be used to advance the health of individuals and populations? The third provided critical financial resources and professional development activities needed to pursue a PhD. These and other important career events were instigated or supported by a handful of mentors and institutions who have counseled and provided support of her career. She believes that a key component of acting on her gratitude for the mentorship she received is to “pay it forward.” This is one of the reason she has mentored more than 20 students within her department and across the UM School of Public Health, many of whom are minority students. She also has a strong record of service to the profession through her involvement in professional organizations.

Sánchez is recognized for her work on latent variable models with environmental health applications, considering both cross sectional and longitudinal designs. Most recently, she has also developed expertise in statistical methodology to study associations between the built environment and health. In addition to her work in environmental health, she has extensive expertise in research involving health disparities and cardiovascular disease, including stroke, as well as the effectiveness of policies geared toward elimination of childhood obesity. She is an active proponent of and participant in team science approaches to scientific discoveries, to which she contributes not only her statistical knowledge and expertise, but is also ready to immerse herself in the scientific field as a way to more effectively collaborate and advance a given field as well as statistical methodologies. Through this immersion science content, she is able to marry statistical rigor with practical considerations of the research questions at hand. In less than 10 years since obtaining her PhD, she has published over 100 peer reviewed articles in leading statistical, epidemiology, and medical journals including JASA, Biometrics and the Journal of Applied Statistics, Statistics in Medicine, Epidemiology, American Journal of Epidemiology, Environmental Health Perspective, JAMA Pediatrics and Health Affairs, showing that her research is of very high caliber and relevant to practical problems in health research. She has been very successful in obtaining research funding, including funding from the Robert Wood Johnson Foundation and National Institutes of Health. She serves as Associate Editor of Statistics in Medicine and Journal of the Royal Statistical Society – Series C; has served in grant review panels for the NIH and the Israel Science Foundation; and served as a committee member for panels organized by the National Academies of Science.